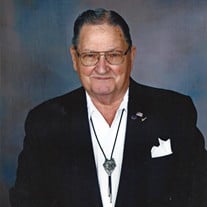 Mr. A. J. Kilgore, age 80, of Columbia, formerly of Shelbyville, passed away Saturday, January 9, 2016. Funeral services, with full military honors, will be 1 PM Tuesday, January 12, 2016, at Feldhaus Memorial Chapel. Brother Steve Murphree will officiate. Burial will be in Mt. Hermon Cemetery. The family will receive visitors 11 AM until service Tuesday at the funeral home. He was born June 8, 1935, in Theta, Tennessee, to the late Robert Lynn and Mary Geneva Height Kilgore. He was a bombardier trainer and veteran of the United States Air Force. Preceding him in death were two wives, Donna Kilgore, in 2004 and Catherine Kilgore, in 2013, and a brother, Robert D. Kilgore. Survivors include a son, Arthur J. Kilgore, Jr., of Athens, Alabama, and a daughter, Teresa Marie (Barry) Cox), of Culleoka; a grandson, Matthew Jay Kilgore, of Tuscaloosa, Alabama; the mother of his children, Lynda Gordon, of Athens, Alabama; a special friend, Jaidyn Ezell; longtime friend and caregiver, Peggy Tillery, of Columbia; nephew, Michael (Linda) Kilgore and a niece, Susan Morgan; several great nieces and nephews. Memorials may be made to the Heart and Cancer Center at Vanderbilt. Feldhaus Memorial Chapel is assisting the family with arrangements.

The family of Mr. A. J. Kilgore created this Life Tributes page to make it easy to share your memories.

Send flowers to the Kilgore family.