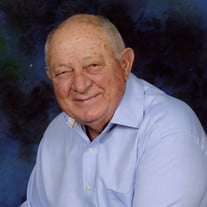 Mr. Albert “Al” Walchshauser, age 87, of Shelbyville, passed away Saturday, January 6, 2018. Funeral services will be 12 noon Tuesday, January 9, 2018, at Feldhaus Memorial Chapel. Brother Jimmy Gray will officiate. Burial, with full military honors, will follow in the Wheel Cemetery. The family will receive visitors 10 AM until service time Tuesday at the funeral home. He was born August 23, 1930, in St. Louis, Missouri, to the late George and Marie Kaiser Walchshauser. He was retired from Service Merchandise Corporation as a facility Maintenance Technician, and a veteran of the United States Air Force, serving during the Korean War. In addition to his parents, he was preceded in death by a brother, George Walchshauser. Survivors include his wife, Peggy Walchshauser, of Shelbyville; two sons, Gary Walchshauser, of Knoxville, and Perry Walchshauser, of Shelbyville; two grandchildren, five great grandchildren, and on great great grandchild. Memorials may be made to: American Cancer Society or American Heart Association. Feldhaus Memorial Chapel is assisting the family with the arrangements.

The family of Mr. Albert J. Walchshauser created this Life Tributes page to make it easy to share your memories.

Send flowers to the Walchshauser family.