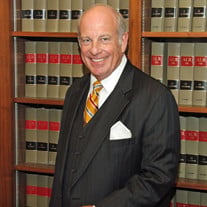 Andrew Clark (Andy) Rambo, age 68, of Shelbyville, passed away Monday, April 25, 2016, while vacationing in Tuscany, Italy. Memorial services will be 3 PM Sunday, May 1, 2016, at the Blue Ribbon Circle. The family will receive visitors 1-3 PM Sunday at the Blue Ribbon Circle. He was born February 23, 1948 in Nashville, Tennessee. He was a graduate of Shelbyville Central High School, Memphis State University, Memphis State Law School, and later attained his MBA from Belmont University. He was Chairman of the Board of First Community Bank, and Board member of First Community Mortgage. He was the senior partner and founder of the firm of Rambo, Trott and Burris, and practiced law in Shelbyville for 42 years. He was a member of the Tennessee Bar Association, Shelbyville Bar Association, American Board of Trial Advocates, a Rule 31 General Civil Mediator, and a Certified Trial Specialist. In 2014, he was also nominated and received the prestigious Super Lawyer Award. He served as Shelbyville Mayor from 1979 to 1983, and was City Attorney from 1983 until 1989. Mr. Rambo was an Eagle Scout, and an avid traveler, hiker and diver. He was preceded in death by his stepfather, Sydney (Bud) McGrew. He is survived by his daughter, Andrea (Ben) Ross, of Franklin, Tennessee, and three grandsons, Jay Ross, Drew Ross and Sean Ross, and his mother, Evelyn (Bud) McGrew of Shelbyville, sister, Kate (Brent) Canady of Bell Buckle, and two nephews, ENS Andy Canady (USN) and Benjie Canady. In lieu of flowers, donations may be made to the National Geographic Society. Feldhaus Memorial Chapel is assisting the family with the arrangements.

The family of Mr. Andrew Clark Rambo created this Life Tributes page to make it easy to share your memories.

Send flowers to the Rambo family.