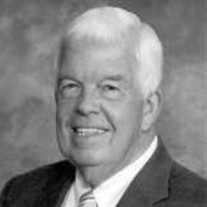 Billy Frank Hicks, 83, retired Senior Chairman of the Board of First Community Bank died after a short illness early Christmas morning at Maury Regional Medical Center. Born April 28, 1937 in Clarksville, TN he was the son of the late Frank Hicks and Katherine Perkins Hicks. Billy attended Austin Peay University and then started his early career at Life and Casualty Insurance Company after moving to Shelbyville, Tennessee. He quickly moved into the banking field employed at People’s National Bank before joining First Community Bank of Shelbyville, TN. He continued his banking career at First Community Bank holding the titles of President, Chairman of the Board , and Senior Chairman of the Board before his retirement in October, 2014. Billy was active in many community organizations, most notably the Shelbyville Lions Club where he was recently awarded a 50 year service award. He also served as President of his local club and was a recipient of the Melvin Jones fellowship award. He was also a member of the Shelbyville Chamber of Commerce and the Tennessee Walking Horse Association. He was a faithful member of Shelbyville First United Methodist Church serving on many committees and the current treasurer of the Methodist Men’s club. He was a member of the Tennessee Banker’s Association and received the award for Leaders in Banking Excellence in 2012. Billy loved his sports and in particular the Atlanta Braves and the Tennessee Titans. He could tell you about every game in great detail. He also enjoyed traveling, but the most important thing to him was spending time with his family and his wife, the love his life . He can best be described as a fine Christian man and a true southern gentleman. Mr. Hicks is survived by his wife and best friend of 62 years, Margaret Mills Hicks; daughter, Dr. Carol ( Ricky) Broadway of Columbia , TN and son Jeff (Kim) Hicks of Shelbyville, TN; grandchildren Taylor ( Mindy) Hicks and Courtney Hicks of Shelbyville, TN and Andrew ( Paige) Broadway of Nashville, TN; great grandchildren Kase and Kole Hicks and Everette Broadway. He was preceded in death by his parents. Pallbears include Taylor Hicks, Courtney Hicks, Andrew Broadway, Al Bellafant, David McGee II, and Scott Dennis. Honorary Pallbears include Wendell and Dinah Agnew, Wanda Grissom, Tom and Brenda Clifford, David and Shirley McGee, Sr, Andy and Edna Lee Borders, Doug and Becky Murphy , Randy and Leesa Stevens, Mitchell and Margaret McGee, and Bob and Carolyn Bellafant. The family would like to express their deep gratitude to the doctors and nurses of MRH , Dr. Gaylon Harris, Dr. Jeff Adams, and all the friends who cared for him. The family request that memorials be made to Shelbyville First United Methodist Church. A private graveside service will be held Thursday, January 14, 2020, at Willow Mount Cemetery. Feldhaus Memorial Chapel is assisting the family.

Billy Frank Hicks, 83, retired Senior Chairman of the Board of First Community Bank died after a short illness early Christmas morning at Maury Regional Medical Center. Born April 28, 1937 in Clarksville, TN he was the son of the late Frank... View Obituary & Service Information

The family of Mr. Billy F Hicks created this Life Tributes page to make it easy to share your memories.

Billy Frank Hicks, 83, retired Senior Chairman of the Board of...

Send flowers to the Hicks family.