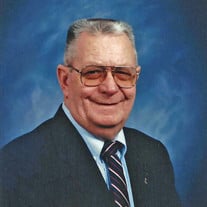 Billy Marvin Stevenson was born December 8, 1931 and died peacefully at St. Thomas Rutherford Hospital in Murfreesboro, on Saturday, May 20, 2017. Funeral services will be 10 AM Tuesday, May 23, 2017, at Midland Heights Baptist Church. Pastor Scott Reed will officiate. Burial, with full military honors, will follow in Willow Mount Cemetery. The family will receive visitors 4-8 PM Monday at the funeral home. Mr. Stevenson was the son of the late Emmett Marvin and Lula Mae Davis Stevenson. He was preceded in death by his beloved siblings, James Franklin Stevenson, Dorothy McGee Cates, Robert Richard McGee, and twins, Everett and Emmett Stevenson, who died in infancy. Also, preceding him in death was a nephew, Larry Cates. Survivors include his wife of 58 years, Audrey McAnally Stevenson, of Shelbyville, and a son, Robert Richard Stevenson, of Evans, Georgia; nieces and nephews, Nancy Stevenson, of Unionville, Kerry Stevenson of Sale Creek, Tennessee, Wayne Adcock, of Unionville, Roger Adcock, of Chattanooga, Mike Adcock, of Shelbyville, Bobbie Porter, of Brentwood, and Janyce Adcock and Butch Cates, both of Shelbyville. He will be remembered for his love of his family, his life long love of fishing, and for his commitment to help men and women live life one day at a time. Mr. Stevenson was retired from Empire Pencil Company and had also worked many years at the Joliet Army Ammunition Plant, in Joliet, Illinois. He was a veteran of the United States Army, and held membership at Midland Heights Baptist Church. Memorials may be made to the Midland Heights Baptist Church Building Fund. Feldhaus Memorial Chapel is assisting the family with the arrangements.

Billy Marvin Stevenson was born December 8, 1931 and died peacefully at St. Thomas Rutherford Hospital in Murfreesboro, on Saturday, May 20, 2017. Funeral services will be 10 AM Tuesday, May 23, 2017, at Midland Heights Baptist Church. Pastor... View Obituary & Service Information

The family of Mr. Billy Marvin Stevenson created this Life Tributes page to make it easy to share your memories.

Send flowers to the Stevenson family.