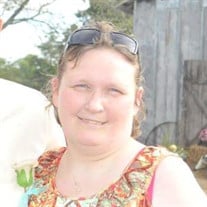 Bobbie Ann King Whited, age 33, of Auburntown, passed away Tuesday, June 14, 2016, surrounded by her loving family, after a lengthy and courageous struggle with cancer. Funeral services will be 11 AM Friday, June 17, 2016, at Feldhaus Memorial... View Obituary & Service Information

The family of Mrs. Bobbie Ann Whited created this Life Tributes page to make it easy to share your memories.

Send flowers to the Whited family.