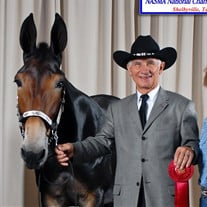 Reverend Charles “Buddy” Pope, age 73, of Shelbyville, a native of the Rover Community, passed away Monday, December 17, 2018. Funeral services will be 11:00 A.M. Friday, December 21, 2018, at Feldhaus Memorial Chapel. Reverend Wayne Wood and Reverend John Shoulta will officiate. Burial will follow at Cothran Cemetery in Rover, TN. Buddy’s beloved mule “Kate” will lead the hearse into the cemetery. Visitation will be from 3:00 – 8:00 P.M. Thursday, December 20, 2018, at the funeral home. Buddy was born in Rover, Tennessee on May 17, 1945, to the late Reverend John and Berniece Pope. He had two sisters, Frances Pope Windrow and Frankie Lee Pope McClain. The family moved to Rose, Oklahoma when he was twelve years old, where his Dad was pastor of the church there. The family returned to Rover and Buddy graduated from Community High School in May of 1964. Buddy married Judy McCarty on December 18, 1965. He and Judy were married forty years and two months. Judy passed away on February 1, 2006, after battling liver cancer for several months. Together they had two children, Angela Pope Brown and Charlie Pope. They had four grandchildren: Brandon Brown, Meleah Brown, Addison Pope, and Emma Pope. Angela became a registered nurse and Charlie is the Vice Principal of Cascade High School. Buddy was a standards engineer for several years until he entered the ministry in the Cumberland Presbyterian Church in 1982. He went back to school and completed the educational requirements for ordination in 1986. He was ordained in 1986 and moved to Lebanon, Missouri in December of 1987. Buddy has pastored churches in Tennessee, Missouri, Kentucky, and Alabama. He has served as the Vice Moderator of the Cumberland Presbyterian Church and Stated Clerk of Columbia Presbytery. He was elected as moderator of every Presbytery he as been a member of. He was also on the Board of Stewardship for the Denomination. He was the Pastor of Richland Cumberland Presbyterian Church in Lewisburg, Tennessee. Buddy began working part time at Feldhaus Memorial Chapel in March of 2006. He and everyone at the funeral home were best friends. Buddy married Dawn Ledbetter on March 29, 2008. She had lost her husband to cancer and she and Buddy have had a great life with their “blended” family. He purchased his first mule “Kate” in 2009. He has shown Kate and won numerous awards over the years. Buddy and Kate were two time winners of the Columbia Mule Show Parade and participated in the Celebration Mule and Donkey Show. Buddy and his son-in-law, Troy went to the Grand Canyon in 2010 and rode mules from the bottom of the canyon to the top on his 65th birthday. He is preceded in death by his first wife, Judy McCarty Pope; a sister, Frances Windrow; and a granddaughter, Ashley Brown. He is survived by his wife, Dawn Parker Pope, of Shelbyville; a daughter, Angela (Troy) Brown, of Estill Springs, Tennessee; a son, Charlie (Cindy) Pope, of Shelbyville; three step-sons, Justin Smith, Joel (Nadia) Smith, and Jared (Haley) Smith; a sister Frankie (Gene) McClain, of Chapel Hill; a beloved father-in-law, Robbie Adcock; four grandchildren: Brandon Brown, Meleah (Walker Stephens) Brown, Addison Pope, and Emma Pope; eight step-grandchildren: Javan Smith, Elijah Smith, Micah Smith, Levi Smith, Lydia Smith, Philip Smith, Sarah Smith, and Jacob Smith. In lieu of flowers, memorials may be made to Cascade Cafeteria Worker’s Scholarship Fund at First Community Bank. Feldhaus Memorial Chapel is assisting the family with the arrangements.

The family of Rev. Charles "Buddy" Pope created this Life Tributes page to make it easy to share your memories.

Send flowers to the Pope family.