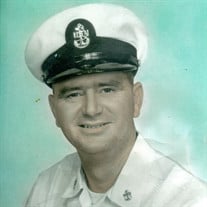 Mr. Charles I. Burrow, age 83, of Shelbyville, passed away Monday, December 11, 2017. Funeral services will be 12:30 PM, Friday, December 15, 2017, at Feldhaus Memorial Chaepl. Reverend Jimmy West will officiate. Burial, with full military honors, will follow in Willow Mount Cemetery. The family will receive visitors 11 AM until service time Friday at the funeral home. He was born September 14, 1934, in Shelbyville, to the late Charles I. Burrow, Sr. and Mary Lou Fowler Perry. He was carreer Navy veteran, retiring with the rank of Chief Boatsmans Mate. He served in both the Korean and Vietnam War. Mr. Burrow was a faithful member of Edgemont Baptist Church. Preceding him in death was his wife, Mary Sudberry Burrow; a sister, Betty L Trent. Survivors include a daughter, Cheryl (Gary) Zimmerman, of New Jersey; a son, David E. Burrow, of California; a sister, Rebecca M. (Albert) Comer, and a brother, Fred “Al” (Teresa) Burrow, both of Murfreesboro; grandson, Justin Burrow; loving and devoted cousin, Melba Wessner; faithful friend and companion, “Frisky”. Memorials may be made to Edgemont Baptist Church Feldhaus Memorial Chapel is assisting the family with the arrangements.

The family of Mr. Charles I Burrow created this Life Tributes page to make it easy to share your memories.

Send flowers to the Burrow family.