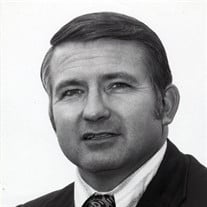 Charles Edward Coffey, aged 81, of Shelbyville, went home to be with the Lord on August 24, 2015 around 9:15pm at his home. Services will be held on Saturday, August 29th at 1pm at the First Christian Church of Shelbyville, Tn. Charlie was born on June 28, 1934 in Bedford County to Gladys Victory and Dewey Coffey. Charlie was the 5th of 10 children. Charlie served in the army, and was both a successful college football coach and businessman, as well as loving father and husband to 4 children. He last served as Head Football Coach at Virginia Tech in Blacksburg, Va. and founder and owner of Nationwide Express Trucking Company before retiring. He was a proud grandfather of 10, and great grandfather of one. Charlie had been a member of First Christian Church sine he was 7 years old and a follower of Christ for as many years. Coffey was preceded in death by his parents and several of his siblings. He is survived by his wife of almost 60 years, Mai Coffey and his two daughters and two sons: Suzanne Mielke of Charlotte, NC, Cindi Johnson and husband Rush Johnson of Charlotte, Mike Coffey and wife Christy of Shelbyville, and David Coffey and wife Tanya, also of Shelbyville, TN. Survivors also include his treasured 10 grandchildren, Matthew Mielke of Charlotte, Meredith Crenshaw and husband Chas, of Greenville, SC, Charlie Coffey of Shelbyville, TN, Hunter Johnson of Daytona Beach, FL, Emily Feldbruegge and husband Adam, Peter Johnson of Charlotte, NC, Kathleen Coffey of Nashville, Parker Johnson of Knoxville, TN, Allie Coffey of Shelbyville and Mary Elizabeth Johnson of Charlotte, NC. Charlie has one grandchild, Levi Crenshaw of Greenville, SC. Brothers and sisters: Preceded in death Marie Coffey and husband Robert King; Preceded in death Ray Coffey survived by wife Evelyn; Survived by Dot Coffey whose husband Quincy Dooley is deceased; Survived by Shirley Coffey whose husband Frank Davis is deceased; Survived by Betty Coffey whose husband Haywood Russell is deceased; Survived by Peggy Coffey and husband Herbie Gibson; Survived by Evelyn Coffey Methvin. Visitation with the family is Friday, August 28th at the First Christian Church at 4-7pm and again from 12-1pm the day of the funeral. Charlie‘s grandsons will serve as his pallbearers. The Reverend Tom Henry will officiate. Charlie died as he had lived, fighting. He was a good man and he made a difference. Memorials can be given to the First Christian Church of Shelbyville, TN. or the Church Street United Methodist in Knoxville, TN.

Charles Edward Coffey, aged 81, of Shelbyville, went home to be with the Lord on August 24, 2015 around 9:15pm at his home. Services will be held on Saturday, August 29th at 1pm at the First Christian Church of Shelbyville, Tn. Charlie... View Obituary & Service Information

The family of Mr. Charles Edward Coffey created this Life Tributes page to make it easy to share your memories.

Send flowers to the Coffey family.