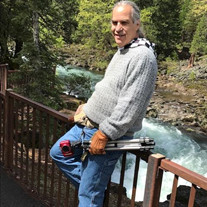 Daniel Wayne Williams died February 4, 2021, at his home in Shelbyville, Tennessee. The family will receive visitors 2-4 PM Saturday, February 6, 2021, at Feldhaus Memorial Chapel. He was born August 31, 1962, at Wright-Patterson Air Force Base in Dayton, OH. He was the son of Cecil Wayne and Martha Ellen Ormsby Williams. Dan’s passions early in life were fishing, skiing and drawing. He later turned his drawing talent into a career as a graphic artist, working for National Pen in Shelbyville for many years. His annual Christmas gift calendars of the scenes, birds and wildlife of Tennessee are saved treasures of many folks on his list. He was a graduate of Nashville State Community College, where he added photography proficiency to his palette. He spent his early years exploring the world with his family, as his father had USAF assignments in Hawaii, Germany and Washington D.C. He hit some rough spots as he launched into the world after finishing high school in Arlington, VA. That rough trail brought him to Denver, CO in the 1990’s. From there, a good friend in Tennessee gave him a hand back to sobriety and Dan never looked back. He took his recovery seriously, turning a big corner in his life. He never married, saying once he suspected a current girlfriend might have expected him to follow her rules if she became a wife. By that time, he, perhaps wisely, realized he was a person who liked his own rules best. He liked to do things his way. In October 2020, he was diagnosed with brain cancer, a glioblastoma multiforme, cutting short dreams of becoming an independent artist, building an environmentally efficient home and more travel. He is survived by his mother, Martha E. Williams, his brother, David, of Vail, CO and his sister, Allison, of Bellingham, WA. His father, Wayne, died in 2014. Dan’s ashes will be interred in the Fraser Cemetery in Fraser, Colorado. Feldhaus Memorial Chapel is assisting the family with the arrangements.

The family of Mr. Daniel Wayne Williams created this Life Tributes page to make it easy to share your memories.

Daniel Wayne Williams died February 4, 2021, at his home in Shelbyville,...

Send flowers to the Williams family.