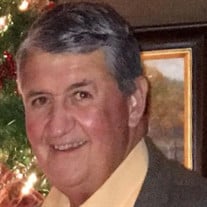 Mr. David Thomas Craig, age 69, of Shelbyville, passed away Friday, June 22, 2018. Raised on a family farm located in Marshall and Bedford Counties, being the second of six children, he graduated from Marshall County High School in 1965 and went on to his beloved University of Tennessee graduating in 1970 earning a degree in Agriculture Economics and Business. Being a member of ROTC, he was a commissioned officer and entered the United States Army, serving a tour of duty in the Republic of South Korea. This individual was a quiet, private person who went about his business the same way he lived out his life – with respect, integrity and humility. You couldn’t be around him for five minutes before you realized that he was firmly grounded in a genuine set of personal values deeply rooted in hard work and compassion for others. His love for agriculture and the farm land of Middle Tennessee laid the foundation for him and his father-in-law to start Craig & Wheeler Realty & Auction Co in the summer of 1973 in Shelbyville, Tennessee. The company, now 45 years old, is one of the oldest in the real estate and auction industry. It has grown into a third- generation family business with 17 real estate agents and 8 auctioneers. David was the past president of the Shelbyville-Bedford County Chamber of Commerce. During his tenure as president, he worked tirelessly with Jim O’Dell, Bedford County Industrial Recruiter, Evelyn McGrew, Executive Director of the Chamber and former mayor Andy Rambo, recruiting and convincing Calsonic to become a member of the Bedford County community. He and his son Ben are the only father-son past presidents of the Shelbyville-Bedford County Chamber of Commerce. He was also past president of the Shelbyville Lions Club and past president of the Bedford County Chapter of the University of Tennessee Alumni. He had been a silver sponsor of Habitat for Humanity for 16 years, a member of the American Legion Post #23, where he has served for over 30 years as Boy’s State Chairman for Bedford County, and a member of the VFW. He held a Tennessee Real Estate Broker license serving as past president of the Bedford County Board of Realtors, a Tennessee Real Estate appraiser’s license and a Tennessee auctioneer’s license. David served as the Advisory Chairman for the Better Business Bureau Central Tennessee branch office. He has been an active member and supporter of the Better Business Bureau since 1997, serving on the Murfreesboro branch board of directors for 4 years and a finalist for the Ambassador Award for the State of Tennessee. He was a supporter of the First Choice Pregnancy Center and a sponsor of the Bedford County Fair. He was always volunteering his services for benefit auctions for cancer patients, homes lost by fire or storm. He supported the Duck River Clean Up and was a sponsor of the Tennessee Walking Horse National Celebration. David enjoyed cattle farming, traveling, Titan and UT football, and his greatest joy was spent with his four grandchildren. He was an active member of the First Presbyterian Church where he served as an elder. He is survived his wife, Belinda Wheeler Craig, of Shelbyville; two sons, Benjamin R. (Lana) Craig and David T. “Tad” (Carissa) Craig, II; two sisters, Martha Jane Locke, of Lewisburg, TN, and Eleanor Craig, of Alabama; two brothers, William Douglas (Brenda) Craig, of Maryville,TN, and Sam Sweeney (Betsy) Craig, of Winchester, TN; four grandchildren, Elizabeth Mackenzie Craig, William Stone Craig, Andrew Walker Craig, and Isabella Ryan Craig; three step-grandchildren, Leah Hope Davis, Parker Ray Davis, and Blake Karsyn Davis, and numerous nieces and nephews. Funeral services will be 10:00 A.M. Monday, June 25, 2018, at First Presbyterian Church in Shelbyville, TN. Visitation will be 5:00 – 8:00 P.M. Sunday, June 24, 2018, at First Presbyterian Church. Burial will be at Round Hill Cemetery in Belfast. In lieu of flowers the family has requested for memorials to be made to the David T. Craig Memorial Scholarship at First Community Bank for an agriculture major attending the University of Tennessee. Feldhaus Memorial Chapel is assisting the family with the arrangements.

Mr. David Thomas Craig, age 69, of Shelbyville, passed away Friday, June 22, 2018. Raised on a family farm located in Marshall and Bedford Counties, being the second of six children, he graduated from Marshall County High School in 1965 and... View Obituary & Service Information

The family of Mr. David Thomas Craig created this Life Tributes page to make it easy to share your memories.

Send flowers to the Craig family.