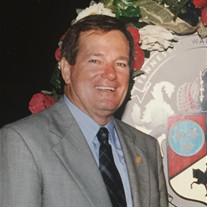 David L. Howard David Lee Howard, 72, of Shelbyville, Tenn., passed away Saturday, December 17, at the Vanderbilt University Medical Center surrounded by his loving family. Visitation will be held Tuesday, December 20, at the Feldhaus Funeral Home in Shelbyville from 4 to 7pm. The funeral Mass will be held on Wednesday, December 21 at noon at St. William’s Catholic Church. A reception in celebration of his life for his family and friends will follow at the family’s home at 117 Ashe Road. David was born in New Jersey to Helen and Julian R. Howard at their home on October 2, 1944. The family moved to Chattanooga, Tennessee, where David attended Our Lady of Perpetual Health Catholic School where he met his wife Mary Watson when they were in middle school, starting a love affair that lasted all of their lives including 50 years of marriage. David went to Notre Dame High School and was able to graduate from the University of Tennessee due to his beloved sister Barbara Knott’s assistance and his incredible work ethic. David graduated with a degree in journalism and he and Mary attended many sporting events in Knoxville as he planned to pursue a career as a sports writer. David had a summer job at the Voice of the Tennessee Walking Horse magazine, and Bruce Spencer influenced David’s life by assisting him financially to graduate from UT and introducing him to the Tennessee Walking Horse. David and Mary married in Chattanooga on August 20, 1966. Shortly thereafter they began their family and moved to Shelbyville, Tennessee to start the Walking Horse Report with the assistance of 12 investors including his mentor Randall Rollins. David and Mary had three children, Christy, Jennifer and Jeffrey, and they built a successful publishing business at Dabora, Inc., including multiple publications. Many of Dabora’s employees have been with the company for 35+ years, and the Dabora family is also saddened by his loss. David also served on the First National Bank Board as well as many other boards and associations, each time willing to put in extreme amounts of work to find the best facts in order to make the best decisions. He was proud to serve on the board of the Tennessee Walking Horse National Celebration for almost 20 years and the board of the American Saddlebred Horse Association. David also served on several boards and committees at the University of Tennessee. David enjoyed real estate development and focused on property in Florida. He was a longtime parishioner and benefactor of St. William’s Catholic Church. A self-made man, David’s greatest joy was his family. With his wife, Mary, their three children and their spouses and his eight grandchildren, David enjoyed travelling, attending sporting events, and family dinners at the family’s game house. David is survived by his wife of 50 years, Mary; his children, Christy, Jennifer and Jeffrey, their spouses Rick Womack, Russ Connelly, and Mindee Howard; and eight grandchildren, Holt Parsons, Brooke Connelly, David Parsons, Cole Connelly, Caroline Connelly, Jax Howard, Sam Connelly and Blake Howard. Each of their lives has been enriched by his love and his counsel and he will be deeply missed. The family asks that donations in his honor be made to the University of Tennessee, St. William’s Catholic Church, the Boys & Girls Club, or to a scholarship program that allows students to pursue their education. The family is forever grateful to Dr. Kyle Joyner of Murfreesboro Medical Center, and Dr. Wes Ely of Vanderbilt University Medical Center and their teams for their outstanding care and compassion, and for their spiritual support.

The family of Mr. David L. Howard created this Life Tributes page to make it easy to share your memories.

Send flowers to the Howard family.