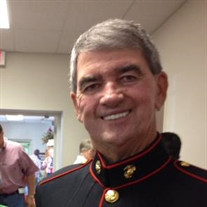 Mr. David G. Orr, age 65, of Shelbyville, passed away Monday, January 26, 2015, at his home after an eight year battle with his illness. Tee time will be 2 PM Friday, January 30, 2015, at Edgemont Baptist Church. Brother Bobby McGee and Brother Jimmy Gray will officiate. Burial, with full military honors, will follow in Willow Mount Cemetery. The family will receive visitors 4-8 PM Thursday at the church. He was born December 1, 1949, in Shelbyville, to the late Robert C. Orr and Mildred Naron Carter. David was a veteran of the United Sates Marine Corp and served in Vietnam. He was the recipient of the Good Conduct Medal, Marine Corp Expeditionary Medal, Vietnam Service Medal, Combat Service Medal, and a Rifle and Pistol Expert. Mr. Orr twice received a double lung transplant, and was very involved in the promotion of organ donation. In July 1996, he became the first Golf Professional at the Sinking Creek Golf Course in Wheel, Tennessee. He held membership The American Legion, Loyal Order of the Moose, and Edgemont Baptist Church. He retired from American Can after 25 years of service. Survivors include his wife, Donna Reeves Orr; a daughter, Jennifer Orr, and a son, Josh Arnold, all of Shelbyville; a sister, Kristi Terceira, and her husband David, of Shelbyville; three grandchildren, Braxton McGill, Jayden Cooper, and Victoria Cooper, niece and nephew, Erik Claxton and Autumn Stone. Memorials may be made to the David Orr Donate Life Scholarship Fund set up a First Community Bank. Feldhaus Memorial Chapel is assisting the family with arrangements.

The family of Mr. David Garland Orr created this Life Tributes page to make it easy to share your memories.

Send flowers to the Orr family.