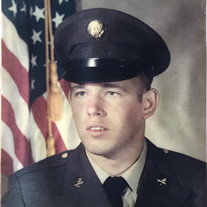 Mr. David E. Presley, age 66, of Shelbyville, passed away Friday, July 15, 2016. Funeral services, with full military honors, will be 5 PM Monday, July 18, 2016, at First Assembly of God. Reverend Glenn Forsee and Reverend Eddie Reed will officiate. Per his request, he will be cremated following the service. The family will receive visitors 2 PM until service time Monday at the church. He was born May 14, 1950, in Franklin County, to Louise Ford Davis, of Bixby, Oklahoma, and the late Lawrence Howard Presley. He was a veteran of the United States Army, and served in Vietnam. He was retired form Arnold Engineering Development Center after 30 years of service. In addition to his mother, he is survived by his wife of 44 years, Charlotte Martin Presley, and two daughters, Karisa (Mike) Matusek and Renee Presley, all of Shelbyville; a brother, Larry Presley of Shelbyville; a sister, Mattie Rider, of Bixby, Oklahoma; grandchildren, Ean Matusek and Landon Calderon; nieces and nephews, Chris Presley, Brad Presley, David Presley, Bob Rider, Joe Rider, and Cindy Sullivan. Memorials may be a made to any Veterans Programs. Feldhaus Memorial Chapel is assisting the family with arrangements.

The family of Mr. David Estill Presley created this Life Tributes page to make it easy to share your memories.

Send flowers to the Presley family.