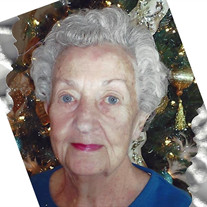 A graveside service celebrating the life of Donna Gore Turney, age 84 of Manchester, was conducted at 1 p.m. Wednesday, February 22, 2017 at Woodlawn Memorial Park in Nashville. Mrs. Turney passed away Sunday February 19, 2017 in Murfreesboro. She was born December 4, 1932 in Nashville, Tennessee, the son of James and Addie Gore. She graduated from West End High School and went on to become a loving, devoted mother and homemaker, and later a grandmother. She is remembered for her kind heart and dedication to others. She devoted 30 selfless years to caring for her elderly neighbor, Bertha Ashley, before her husband’s death in July of 2013. She was a member of the First Presbyterian Church in Manchester, Tennessee where she served on several committees. She took pride in being the historian and Newsletter writer of the church. She loved to take photos and document her surroundings. She loved gardening and bird watching, humming birds especially. Most of all she loved spending time with and cooking for her family. In addition to her parents, she is preceded in death by an infant daughter Terry Diane Turney and husband Richard Reeves Turnery. She was a devoted wife, loving mother, grandmother and sister. She is survived by her two sons, Richard R. “Ricky” Turney, Jr. of Manchester; and Steven Turney and wife, Angie of Murfreesboro; and two grandchildren, Ashton and Ian Turney both of Murfreesboro; brother James “Jim” Gore, Sr. and wife Margie of Manchester along with many loving nieces and nephews. In lieu of flowers, the family asks that donations be made to First Presbyterian Church of Manchester or Grace Hospice Foundation, c/o Avalon Hospice, 132 Saint Andrews Drive Suite B, Murfreesboro, TN 37128- In Memory of Donna Turney.

The family of Mrs. Donna Gore Turney created this Life Tributes page to make it easy to share your memories.

A graveside service celebrating the life of Donna Gore Turney,...

Send flowers to the Turney family.