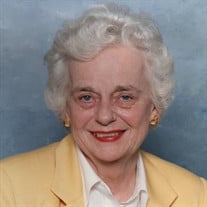 Dorothy Green Tune was born May 30, 1929 to John Crutcher Bell Green and Mary Frances Trice Green of Nashville. She graduated from Hillsboro High School in 1947 and then attended Vanderbilt University where she was an active member of Pi Beta Phi and met and fell in love with Bill Tune. She was married to Bill Tune for 46 years until his passing in 1996. Dot and Bill raised four children and built a wonderful life. Dot was his partner in every sense of the word. When he served as the Executive Director for The Celebration, she planned social events and sold advertising in the Blue Ribbon Yearbook. For Bill’s real estate company, Tune & Company, Dot helped manage auctions and ran the cashier table. Dot continuously wore her wedding band from the moment she and Bill said “I do,” and that precious band still encircles her finger just as it has for the past 69 years. She was an avid bridge player but was not as competitive as her sister, Faffy. For her, a bridge game was about 20% game and 80% conversation, a large portion of which was spent deciding where to go have lunch. She and Faffy could spend days playing cards, while solving all of the world’s problems. Dot loved her church, family, and friends with 100% of her heart. She despised bad grammar, cuss words, and bathroom humor, but she loved her family anyways. She enjoyed eating at Red Lobster and drinking Chardonnay, chilled with a single ice cube. Although she fed many mouths and prepared thousands of meals, she never claimed to enjoy cooking. She loved to knit and needlepoint. She’s made all her family and friends afghans, sweaters, doll sweaters, dog sweaters, scarves, Christmas ornaments, and of course, dish cloths. She and her daughter, Ann, owned a needlecraft store for several years. Though she never gardened a day in her life, Dot remained a dedicated founding member of the Town & Country Garden Club for more than fifty years. She had 4 children, 12 grandchildren, and 9 great-grandchildren. “Nanny” or “Dot Dot,” as she was known to her grandchildren and great grandchildren, took great pride in her close-knit family and commented many times about how proud she was to have “started all of this,” referencing her large family, with her beloved Bill. She loved her large, always-growing, family and was thrilled when she recently learned about two more great grands on the way. Her family’s happiness made her happy, and she saw their accomplishments as hers too. She experienced her share of heartbreak, but the majority of her life was richly blessed with many more moments of incredible joy. She was preceded in death by her parents, husband, son, Buck Tune, son-in-law Mark Farrar, Sr., brothers Johnny and Al Green, and sister, Faffy Dawson. She is survived by two daughters, Ann Farrar and Alice (Scott) Johnson, son John (Angie) Tune, niece Dottie Dawson, nephew Hank Dawson, and her 12 grandchildren and their families, including 9 great-grandchildren. A funeral service will be held at First United Methodist Church of Shelbyville on Friday, October 25 at noon. Visitation with the family will be held two hours prior to the service. Burial will follow the ceremony at Rosebank Cemetery in Flat Creek. Memorial gifts can be made to First United Methodist Church of Shelbyville (122 Public Square N, Shelbyville, TN 37160) or Hospice Compassus (1805 N. Jackson Street, Suite 11, Tullahoma, TN 37388). Feldhaus Memorial Chapel is assisting the family. Feldhaus Memorial Chapel is assisting the family.

Dorothy Green Tune was born May 30, 1929 to John Crutcher Bell Green and Mary Frances Trice Green of Nashville. She graduated from Hillsboro High School in 1947 and then attended Vanderbilt University where she was an active member of Pi Beta... View Obituary & Service Information

The family of Mrs. Dorothy "Dot' Green Tune created this Life Tributes page to make it easy to share your memories.

Send flowers to the Tune family.