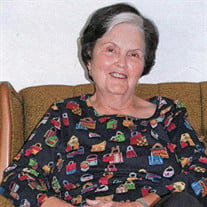 Mrs. Dorothy Bell Mooningham Warren, age 86, of Shelbyville, passed away Thursday, September 8, 2016. Funeral services will be 11 AM Monday, September 12, 2016, at Feldhaus Memorial Chapel. Reverend Scotty Sorrels and Reverend Jason Daughtry will officiate, with burial to follow in Willow Mount Cemetery. The family will receive visitors 3-7 PM Sunday at the funeral home. She was born February 19, 1930, in Bedford County, to the late Wiley Gray and Sophie Crosslin Mooningham. She was retired from Model Sportswear, was very active in the Weight Watchers Program, and was a faithful member of Whiteside United Methodist Church. In addition to her parents, she was preceded in death by her husband, Charles C. Warren, in 1997, a brother, Clarence Mooningham, and a sister, Mary Bass. Survivors include a daughter, Sandra Warden, and her husband Frankie, of Shelbyville; a sister, Mildred Perdue, of Murfreesboro; two grandchildren, Brad Warden, and his wife Tuba, of Ooltewah, TN, and Melissa Clark, and her husband Shane, of Dayton, TN; five great grandchildren, Arda Warden, Mina Warden, Noel Clark, Jacob Clark, Emilee Clark, and Alaina Clark. Feldhaus Memorial Chapel is assisting the family with the arrangements.

The family of Mrs. Dorothy Mooningham Warren created this Life Tributes page to make it easy to share your memories.

Send flowers to the Warren family.