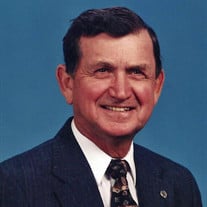 Mr. Earl Urban Morgan age 84, of Shelbyville, passed away Sunday, February 1, 2015. Funeral services will be 11 AM Wednesday, February 4, 2015, at Feldhaus Memorial Chapel. Geoff Giesemann will officiate, with burial to follow in Hillcrest Memorial Gardens. The family will receive visitors 4-7 PM Tuesday at the funeral home. He was born June 9, 1930, in Rutherford County, to the late Harvey and Nora Shelton Morgan. Mr. Morgan served in the United States Navy during the Korean War and was a retired Dairy Inspector with the State of Tennessee Department of Agriculture. In the early 1990’s he was the International Coonhunters Senior Division Champion. He was an elder and faithful member of Fairlane Church of Christ. Preceding him in death were a sister, Ina Armstrong, and four brothers, Gentry Morgan, Larry Morgan, Carey Morgan, and John Morgan. Survivors include his wife of 52 years, Barbara Jean Jones Morgan of Shelbyville; a daughter, Jeanne Simpson, and her husband Tim, of Decatur, Alabama; three grandchildren, Paul Simpson, Kathryn Simpson, and Joel Simpson; a brother, Coleman Morgan, and his wife Nancy, of Fosterville. Memorials may be made to: City of Children’s Mission fund at Fairlane Church of Christ, or Argie Cooper Public Library building fund. Feldhaus Memorial Chapel is assisting the family with the arrangements.

The family of Mr. Earl Urban Morgan created this Life Tributes page to make it easy to share your memories.

Send flowers to the Morgan family.