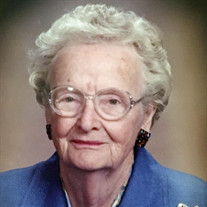 Mrs. Elleen Parsons, age 93, of Shelbyville, passed away Sunday, January 15, 2017. Funeral services will be 11 AM Tuesday at First United Methodist Church, in Shelbyville. Reverend Lanita Monroe will officiate. The family will receive visitors one hour prior to service at the church. Burial will be 11 AM Wednesday, January 18, 2017 at Andrews Chapel Methodist Church Cemetery in Huntersville, Tennessee. Reverend Gradye M. Parsons will officiate. The family will receive visitors beginning at 10 AM Thursday at the Andrews Chapel Methodist Church. Elleen Meriwether was born on October 7, 1923, to parents William and Eloise Meriwether. She grew up in the farming community of Huntersville, Tennessee, surrounded by grandparents, uncles, aunts, cousins, and cotton. After high school, she briefly attended the University of Tennessee. She returned to Jackson and worked as the secretary to the school superintendent. It was during that chapter of her life that she met Harry Parsons, who was attending Union University on the GI bill. They married in 1951 and began their life together in Shelbyville. Gradye came along first, followed by Petey. In between those two births she began her multi decade career as a secretary at Arnold Engineering Development Center. Upon her retirement, her engineering colleagues gave her an honorary doctorate for teaching two generations of engineers how to write a sentence. She was a devoted wife to Harry and a strong and caring mother. She was a very faithful daughter to her mother, and they would talk every Sunday morning at 8 am. She was a strong believer in education and returned to school when her sons were in college, receiving an associate’s degree from Motlow, while still working. She also supported her two daughters in law in their post graduate degrees. She became a widow at age 56 and filled those years with work, home improvements, travel, books, flower and grandchildren. She thought travel was so important to a person’s education, that she financed at least one international trip for each of her grandchildren. She read constantly and gave talks to various groups about the books she had read. She said “They will only listen for about fifteen minutes, so you have to be succinct”. She played a lot of bridge. She loved to watch the Lady Vols and Tiger Wood. She was life long Methodist. She was faithful to the guild, taught Sunday school, and until recent years could be found in the third pew from the front on the right side of the sanctuary. Ellen had many favorite saying: 1) When faced with obstacles “You just had to go ahead on” 2) When talking about the future “as long as your shoes were pointed in the right direction you would be ok” 3) When starting a trip or an adventure “make a good memory for yourself” and now she has done that for us all In addition to her parents, she was preceded in death by three brothers, William Meriwether, Henning Meriwether, and JH Meriwether, and a sister, Virginia. Survivors include two sons, Gradye M. Parsons, and his wife Kathy, of Kodak, Tennessee and Harry M. “Petey” Parsons, and his wife Sherry, of Franklin; grandchildren, Joshua D. Parsons, Rachel Erin Parsons-Wells, Amanda Faith Parsons, and Patrick Harry Parsons; great grandchildren, Jacob Dylan Parsons-Wells, Elliana Parsons, and Adelynn Parsons. Memorials may be made to: Shelbyville Bedford County Library or First United Methodist Church. Feldhaus Memorial Chapel is assisting the family with arrangements.

The family of Mrs. Elleen Parsons created this Life Tributes page to make it easy to share your memories.

Send flowers to the Parsons family.