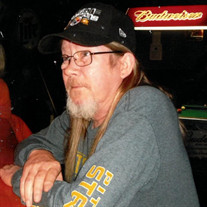 Frank G. Mikeals born on July 7, 1954, from Lawernceville, West Virginia and East Liverpool, Ohio area, departed from this world on September 1, 2019 in Tennessee. He is survived by his son Frank (Angela) Mikeals, II, two step-daughters, Tammy Williams and Misti Smith, all of Shelbyville; two sisters, Jeannie Garrell, of East Liverpool, Ohio, and Petty Green, of Shippingport, PA; one brother, David Mikeals, of Texas; five grandchildren and three great-grandchildren. He leaves behind seemingly endless friends from all over the country. There is Bruce, who became as near as a brother as a friend can and Randy, who checked in on his pal up until the last of his time, just to name a couple. To the rest, if you ever had the pleasure of shooting him a game of pool or simply talking over a beer, you know who you are. Per his wishes, he was cremated. There will be no memorial, except for when a couple of friends and family get together to recall some funny, crazy, wild , or beautiful moments of his life. Feldhaus Memorial Chapel is assisting the family.

The family of Mr. Frank George Mikeals created this Life Tributes page to make it easy to share your memories.

Send flowers to the Mikeals family.