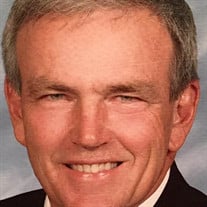 Frank Latimer Robinson, beloved husband, father, grandfather and great grandfather left this earth to be with his Lord and Savior on September 3, 2015. Frank was born to Selma (Eskridge) and Frank L. Robinson Sr. May 7, 1945 in Charlotte, N.C. He joined the Naval Reserve program at the age of seventeen while attending Broughton High School in Raleigh, N.C. He enrolled at Clemson University in 1963 as the proud recipient of a football scholarship. After his sophomore year, Frank realized he had far more of a future as an engineer than as a football player. It was during this time at Clemson that he met his loving wife of 49 years, Lyn (Jennings). Upon graduation in 1967 from Clemson, he served two years active duty in the Navy. After college and his military service, Frank enjoyed a successful career in the manufacturing industry working for Black & Decker, Rockwell International, and ending his career with Stanley Tools. Frank was one of the owners of both the Omni Center Physical Therapy Clinic (Shelbyville) and Murfreesboro Wine & Spirits (Murfreesboro). Frank was a devoted family man and friend. He was active on many boards and supported charitable organizations in the community. An avid golfer, Frank was a long time member of the Riverbend Country Club where he regularly played until just before his death. He always made sure his friends and playing partners had gas money thanks to his regular donations. Frank is preceded in death by his parents and loving older sister Shirley. He is survived by wife Lyn, sons Wally (Renee) and Ted (Michelle), grandchildren Ashlee, Kellee, Fox, Macey, Ava, Mia Grace, and great-grandchild Savannah. Visitation will be held at The Episcopal Church of the Redeemer, Shelbyville, TN on Friday, September 4, 2015 from 4-7 p.m. The funeral will be held at the First Presbyterian Church in Shelbyville, TN on Saturday, September 5, 2015 at 11 a.m. with Father Peter Whalen officiating and Reverend Lindsey Wade assisting. A second visitation will be held one hour prior to the service. Memorials or contributions in Frank’s name may be made to The Episcopal Church of the Redeemer, The First Presbyterian Church, or the charity of your choice. Feldhaus Memorial Chapel is assisting the family with the arrangements.

Frank Latimer Robinson, beloved husband, father, grandfather and great grandfather left this earth to be with his Lord and Savior on September 3, 2015. Frank was born to Selma (Eskridge) and Frank L. Robinson Sr. May 7, 1945 in Charlotte, N.C.... View Obituary & Service Information

The family of Mr. Frank L. Robinson created this Life Tributes page to make it easy to share your memories.

Send flowers to the Robinson family.