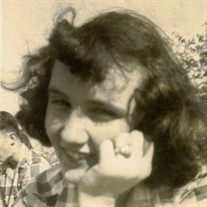 Gaile Dexter Brown was born May 24, 1936 in Detroit, Michigan. She was the daughter of Douglas Dexter and Florene Bell Dexter. When she was seven, she accepted Jesus Christ as her Savior and Lord. As a child, she and her sister, Joyce, sang at Bible meetings conducted in the home of Tim LaHaye’s mother. Gaile’s family moved to Arkansas in 1951 when her father answered the call to the ministry and she became a preacher’s daughter. Gaile was very involved in her father’s ministry, assisting with visitation, as well as beginning a Bible study in her high school. In Mena, Arkansas, Gaile met a cool young man wearing a leather jacket named Charlie Brown. Charlie and Gaile often went to Dairy Queen on dates. Gaile loved chocolate milk shakes, a treat she would enjoy throughout her life. Gaile attended Mena High School and enjoyed watching Charlie play baseball. The couple were married on July 3, and two years later were blessed with daughter, Deborah. Gaile and Charlie moved to Omaha, Nebraska in 1955. While there, the first Southern Baptist church in Omaha, Nebraska was started in their home. Charlie was ordained as a deacon in this church. In 1963, Charlie was called into the ministry and was ordained at Hillcrest Baptist Church in Lavista, Nebraska. In 1964, Charlie and Gaile moved to Tennessee where Charlie became pastor of the Oak Hill Baptist Church in Fayetteville. That same year, they welcomed Doug into the world. (Doug would grow up to become a Southern Baptist minister, making Gaile a preacher’s mother.) Gaile remained a housewife and support to Charlie’s ministry at Oak Hill and Meadowview Baptist Church in Lawrenceburg, Tennessee. In 1969, the Browns accepted the call of Southside Baptist Church in Shelbyville, Tennessee. Gaile went to work at Sullivan’s Department Store. In 1970 they moved to Cullman, Alabama to pastor the Bethsaida Baptist Church. While in Cullman, Gaile worked for the Belk Hudson Department Store where she served as a buyer and a sales associate. In 1973, the family moved to Jasper, Alabama to pastor the Westside Baptist Church. While in Jasper, Gaile’s love for missions blossomed. She served on the Alabama WMU Board, and began teaching mission studies. She continued to teach mission studies until her death. In 1979, Charlie and Gaile returned to Shelbyville to pastor the Shelbyville Mills Baptist Church. Gaile returned to Sullivan’s Department Store where she was a sales associate until 1987 when she began her banking career at People Bank. She worked as a teller and teller supervisor until 2000 when she went to First Community Bank, where she happily worked until her death. Gaile went to be with the Lord on October 31, 2016. Burial was in Melson Cemetery in Lincoln County. She is survived by a daughter, Deborah Charlene Mason, wife of Marty Mason, and Douglas Frank Brown, husband of Laurie Williams Brown; 2 sisters, Joyce Woodard and Sharon Henson; 1 sister-in- law, Trudy Brown Esry. She has 8 grandchildren, Laura Gaile , Stephanie, Rebecca, Sara, Caroline, Miranda, Earl, Samuel, and 6 great grandchildren. She was proceeded in death by her husband, Charles Ernest Brown, and her sister, Betty Pickens. Feldhaus Memorial Chapel is assisting the family with the arrangements.

Gaile Dexter Brown was born May 24, 1936 in Detroit, Michigan. She was the daughter of Douglas Dexter and Florene Bell Dexter. When she was seven, she accepted Jesus Christ as her Savior and Lord. As a child, she and her sister, Joyce, sang... View Obituary & Service Information

The family of Mrs. Gaile D. Brown created this Life Tributes page to make it easy to share your memories.