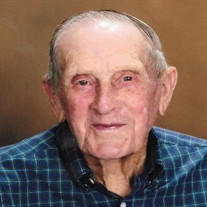 James HARRY Bingham went to be with the Lord Saturday, June 23, 2018. Funeral services will be held 2 PM Thursday, July 5, 2018, at Feldhaus Memorial Chapel, with visitation from 12 noon until the service at the funeral home, followed by burial in Hazel cemetery, Bell Buckle. Brothers Bob Young, Bob Brinkmann, and Jeff Smith will officiate. Harry was an active member of the Beechwood church of Christ until they merged with the Bell Buckle church of Christ where he served as an Elder for many years. In 1944 Harry married Mary Lovvorn Bingham. They had been married for 44 years when she passed away in 1989, at age 64. Harry was 98 years old and a lifelong resident of Bell Buckle. When he became sick two and a half years ago, he moved to Shelbyville and lived with his daughter Betty and her husband David Sanders. He and Mary raised their family in the house where he grew up in the Beechwood Community until 1981 when he retired and they “moved to town”, closer to Bell Buckle. He was a farmer all his life and continued his love of farming with a large vegetable and flower garden. He enjoyed working his garden and having vegetables to share with others. Every year he froze corn, canned green beans, and pickle for the entire family. In addition to Mary he was preceded in death by his parents, Sam Josh and Bennie May Johns Bingham and brothers Granville and Edwin Bingham. Surviving are his two daughters; Mary Ann (Joe) Campbell of Readyville, Betty (David) Sanders of Shelbyville, four grandchildren; Wayne (Jennifer) Rust, Jr. of Anchorage, AK, Angela (Kenneth) Wells of Murfreesboro, Lori (Brad) Stephens of Murfreesboro, and Bing (Janelle) Sanders of Fresno, CA, six great-grandchildren; Christina Wells, Ava Rust, Caden and Tanner Stephens, Bingham and Rhett Sanders, sister-in-law, Nettie Thompson Bingham of Paducah, KY, nieces and nephews, cousins, and many wonderful friends. A special thank you to Dr. Joseph Scott, Josh, Tammie, Cassie, and all the staff at CARIS Healthcare Hospice for their professional care and kindness. In lieu of flowers the family has requested memorials be made to the Bell Buckle church of Christ or CARIS Healthcare Hospice, 242 Heritage Park Dr., Suite 101, Murfreesboro, TN 37129. Feldhaus Memorial Chapel is assisting the family with the arrangements.

James HARRY Bingham went to be with the Lord Saturday, June 23, 2018. Funeral services will be held 2 PM Thursday, July 5, 2018, at Feldhaus Memorial Chapel, with visitation from 12 noon until the service at the funeral home, followed by burial... View Obituary & Service Information

The family of Mr. Harry Bingham created this Life Tributes page to make it easy to share your memories.

James HARRY Bingham went to be with the Lord Saturday, June 23,...

Send flowers to the Bingham family.