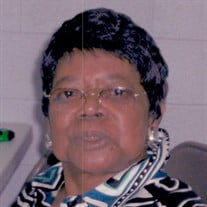 Mrs. Hattie Warner O’Neal, age 88, of Shelbyville, passed away Wednesday, December 11, 2019. Funeral services will be Tuesday, December 17, 2019 at 12 Noon, visitation will be one hour prior to the service. Hattie Warner Yeargins O'Neal, the second of three children, was born to Roy Yeargins and Gertrude Warner Yeargins on May 15, 1931 in Chapel Hill, Tennessee.After a long illness, Ms. O'Neal transitioned peacefully to her heavenly home on Wednesday, December 11, 2019 at her home with her sister and nephew at her side. She was preceeded in death by her parents, two sisters, Dora Yeargins and Virginia Smith, two nephews, John Smith and Gregory Yeargins, and three sons, Michael Edwin O'Neal, Rodger Dale O'Neal and Anthony O'Neal. Ms. O'Neal was educated in the Marshall County Public Schools, specifically Hillgrove and Farmington Rosenwald Schools. She was married to Gentry O'Neal Jr. for twenty-five years and from their union two daughters, Hazel Fonda Thomison and Teresa Ann Turner, and three sons were born, Michael, Rodger, and Anthony(all deceased). Ms. O'Neal worked for several years as the head cook at the Hi-Hat Restaurant in Lewisburg, TN and she retired from working on the production line for Faber-Casteel in Lewisburg, TN after many years of dedicated service. After retirement she traveled with and was a member of the Golden Girls Social Club out of Nashville, TN for several years. Ms. O'Neal dedicated her life to Christ at an early age and was a servant leader in various capacities at Farmington Methodist Church in Marshall County and Scott United Methodist Church in Shelbyville. She was a faithful celebrated member of the Women's Usher Board and she gave generously of her time and culinary talents by serving in the Kitchen Ministry at Scott United Methodist for over 30 years. Ms. O'Neal leaves to cherish in memory, her belovid and devoted caretaker and sister, Mary Roy Yeargins Blackman of Shelbyville; two devoted daughters, Hazel Fonda Thomison of Lewisburg, TN and Theresa Ann Turner of Chattanooga, TN; one devoted nephew, Jeffery E. Blackman (Talisha); and one niece, Valerie Smith McFarland (Nathaniel). Feldhaus Memorial Chapel is assisting the family.

The family of Mrs. Hattie Warner O'Neal created this Life Tributes page to make it easy to share your memories.

Send flowers to the O'Neal family.