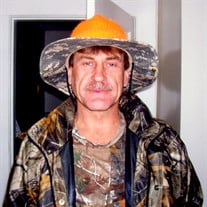 Mr. James Everett Ferguson, age 51, of Normandy, passed away Tuesday, December 23, 2014. There will be an open house, 1-4 PM Sunday, December 28, 2014, at the family home in Normandy. Per his request, his remains were cremated. He was born... View Obituary & Service Information

The family of Mr. James Everett Ferguson created this Life Tributes page to make it easy to share your memories.

Send flowers to the Ferguson family.