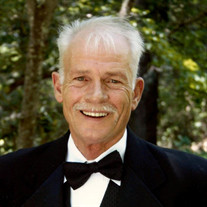 James (“Jim”) Charles Ferrell, age 74, went home to be with our Lord and Savior, Jesus Christ, on Friday, March 2, 2018. Jim leaves behind his wife, Karen Dianne (Pope) Ferrell, sons Craig (Bonnie) Ferrell of Michigan, and Scott Ferrell of Florida, daughter Angela Ferrell of Michigan, stepson Scott (Lisa) Wallace of Milton, three grandchildren, Ashley Serra, Joshua Wallace and Kaitlin Wallace, and two great granddaughters, Isabella Serra and Annistyn Wallace. Jim was predeceased by his parents, William Ross Ferrell and Eva Darden Ferrell, and a brother, William Ross Ferrell, Jr. He also leaves behind many cousins in the Middle Tennessee area. Jim served in the United States Army, 101st Airborne. He lived the majority of his life in the Troy, Michigan area, until he reconnected with the love of his life, Dianne. Jim and Dianne originally met in the mid-1960s, while Jim was in the service. Life took them in different paths, but they reconnected in 2002, and married in 2005. Jim and Dianne spent many happy years traveling and going on adventures. Jim loved watching old movies and enjoyed American history. He was an avid thoroughbred horse racing fan and he and Dianne loved to travel to Kentucky to enjoy the races. Jim worked for DTE Energy in Detroit, Michigan for 37 years. Visitation with the family will be held on Friday, March 9, 2018, from 5:00 p.m. until 8:00 p.m., at Feldhaus Memorial Chapel, 2022 North Main Street, Shelbyville, Tennessee. The funeral service will be held on Saturday, March 10, 2018, at 2:00 p.m., at Feldhaus Memorial Chapel. Burial at Hillcrest Memorial Gardens will follow the funeral service. Feldhaus Memorial Chapel is assisting the family with the arrangements.

The family of Mr. James Charles Ferrell created this Life Tributes page to make it easy to share your memories.

Send flowers to the Ferrell family.