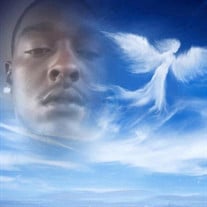 Mr. James “Budda” Garrett, age 32, of Murfreesboro, passed away Saturday, September 5, 2020. Funeral services will be 1 PM Saturday, September 12, 2020, at Feldhaus Memorial Chapel. Pastor Guy Fred Perkins will be eulogist and Minster Kathy Buchanan will officiate. Burial will follow in Willow Mount Cemetery. The family will receive visitors one hour prior to service Saturday at the funeral home. James Edward Garrett was born in Shelbyville to Steve and Charlotte Garrett on May 4, 1988. He was a fine young man who loved his family unconditionally. He enjoyed being a father and most of all, he loved his sisters. James "Budda" Garrett found love with a young lady named Kendra Sanders and he was blessed to have found love with his second family, her parents, Larry and Teresa Sanders, who loved him as if he was their own son. James was the type of man who gave love that is why it was easy to love him. Budda as he was called, was employed at Adient as a production technician. His radiant smile could draw anyone in. He will be truly missed by all who knew him especially his family. He is survived by his parents, Charlotte Garrett, of Shelbyville, and his father, Steve Garrett, of Louisville, Kentucky; fiance, Kendra Sanders, of Murfreesboro; his children: Jayce Garrett, Javion Garrett, and Elijah Webb; his sisters, Violet (Wesley) Wilson, Courtney (Travis) Verge, Felcia Garrett, all of Shelbyville; a step-sister, Alexis Fulton; three aunts, Velencia (Gary) Haile, of Shelbyville, Robin Garrett, of Ohio, and Vicki Clark, of Louisville, Kentucky; two uncles, Charles Wilson, of Shelbyville, and Michael Garrett , of Ohio; two grandmothers, Lula Wilson, of Louisville, Kentucky, and Felicia Garrett, of Dayton, Ohio; his second family Larry and Teresa Sanders, of Murfreesboro; and numerous nieces, nephews, cousins, and friends. Feldhaus Memorial Chapel is assisting the family with the arrangements.

The family of Mr. James "Budda" Garrett created this Life Tributes page to make it easy to share your memories.

Send flowers to the Garrett family.