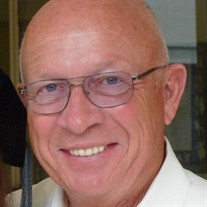 Mr. James Allen Henderson, age 70, of Shelbyville, passed away Tuesday, July 11, 2017. A Memorial Service will be 6 PM Friday, July 14, 2017, at Feldhaus Memorial Chapel. The family will receive visitors Friday 4-6 PM at the funeral home. He was born May 3, 1947, in New York, to the late Milo Randolph and Eleanor Devorack Henderson. He was a retired pilot for Federal Express, was the first chief pilot for Embry Riddle, and was voted Pilot of the Year for the Angel Flight Program. Early in his career, he was the first Chief Pilot and Director of Operations for both Colgan Airways and Tennessee Airways. He was a faithful member of The Episcopal Church of the Redeemer. He enjoyed staying actively daily and taking on his hobbies in aviation and other areas. Survivors include his wife, Susie Henderson, of Shelbyville; two sons, David (Sheena) Henderson, of Knoxville, and Michael (Colleen) Henderson, of Memphis; a daughter, Nicole (Brian) Trenholme, of Columbia, Missouri; two step sons, Bryan Stevens and Keith Stevens; a brother, Milo Henderson, of Ridgefield Park, New Jersey; three grandchildren, Miles Henderson, Tucker Stevens and Shelby Stevens. Memorials may be made to The Episcopal Church of the Redeemer, 203 E. Lane St., Shelbyville, TN 37160. Feldhaus Memorial Chapel is assisting the family with the arrangements.

The family of Mr. James Allen Henderson created this Life Tributes page to make it easy to share your memories.

Send flowers to the Henderson family.