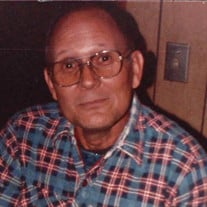 Mr. James McCarty, age 82, left this land of the dying for a better land on April 9, 2017, at his daughters home in Rover. There to bid him a tearful farewell were grieving family members. He was born July 27, 1934 to the late Leland Thompson McCarty and Clara Mae Stephens McCarty Douglas in Bedford County, TN, near Deason. At the age of 6 his family moved to Fosterville, TN in Rutherford County where he lived until the age of 18. Early in life he developed a strong work ethic which he passed on to his 3 children. He was a former employee of the Empire Pencil Company and Eaton Corporation, retiring from Eaton in December 1995. He was married to Annie Lou Carter on April 28, 1956 and was looking forward eagerly to their 61st anniversary. He put on His Lord in baptism in January 1965 and had served faithfully in the Kings Army. He was a member of El Bethel Church of Christ since April 1968. He was preceded in death by his parents and an infant son Wayne is 1967. He is survived by his wife Annie Lou Carter McCarty, of Wartrace, two daughter, Lillie (Ron) Ramage, of Acworth GA, Janet (Bobby) Wilhoite, of Unionville, a son, James (Joann) McCarty, Jr. of Lawton, OK; grandchildren, Felicia (Russ) James, of Murfreesboro, Daniel (Jen) Moore, of Bowling Green, KY, Bobby (Brittany) Wilhoite, of Unioville, Jimmy (Desiree) McCarty, Tacoma, WA, Laura McCarty Puyallup, WA, Ashley (Jay) Carter, of Unionville, and Rachel (Garrett) Blackburn, of Nashville, TN. He is also, survived by two step- grandchildren, Krista (Jacob) Brady, of Independence, MO, and Kyle Ramage of Manhatton, KS, twelve great grandchildren, and two step great grandchildren. Funeral services will be 11 AM Tuesday, April 11, 2017, at Feldhaus Memorial Chapel. Donnie Rader will officiate, with burial to follow in Willow Mount Cemetery. The family will receive visitors Monday 4-8 PM at the funeral home. Memorial contributions may be made to Hospice Compassus of Tullahoma, TN. Feldhaus Memorial Chapel is assisting the family with the arrangements.

Mr. James McCarty, age 82, left this land of the dying for a better land on April 9, 2017, at his daughters home in Rover. There to bid him a tearful farewell were grieving family members. He was born July 27, 1934 to the late Leland Thompson... View Obituary & Service Information

The family of Mr. James McCarty created this Life Tributes page to make it easy to share your memories.

Send flowers to the McCarty family.