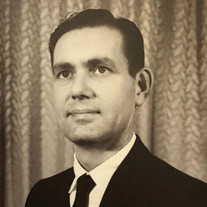 John C. Carlton, Sr., 93, of Shelbyville, TN, passed away peacefully on November 16, 2020, at Alive Hospice in Murfreesboro, TN. He was born on March 15, 1927, in Rover, TN, to the late Maggie (Smotherman) and David Clayton Carlton. A proud member of the United States Air Force, John served his country for 21 years (1943, 1947-1967), retiring with the rank of Chief Master Sergeant. During his service he was twice awarded the Air Force Commendation Medal as well as the Army Commendation Medal. He was also a three-time recipient of the Air Force Outstanding Unit Award, a five-time recipient of the Air Force Good Conduct Medal and also received the Army Good Conduct Medal and the Victory in World War II Medal. Upon retiring from the service, John was employed by Teledyne Technologies (formerly Teledyne Brown Engineering) in Lewisburg, TN, where he continued his work as an electronics engineer. After 23 years with Teledyne, he retired in 1990 as the Director of Environmental and Reliability Testing. John married Elizabeth (Tate) Carlton on September 7, 1944, and they had two children, John C. Carlton, Jr., and Cynthia L. Carlton. They were married for 61 years. In 2006, John and Codula (Cordy) Sievert Carlton were married on June 24th at Arnold Air Force Base and were together for 14 years before his passing. John is survived by his wife Cordy; his sister Jean (Carlton) Glasscock of Shelbyville; his son John, Jr., and John, Jr.’s wife Beverly (Bonds) Carlton of Murfreesboro; and his daughter Cynthia and her wife Jennifer Lane of Greenbrier, TN. Other survivors include two granddaughters, Elizabeth Ann (Carlton) Young of Huntsville, AL, and Carrie Carlton of Murfreesboro; two great grandchildren, Adelyn Elizabeth Young and Alexander Carlton Young of Huntsville; and numerous nieces and nephews. Mr. Carlton was preceded in death by his parents, his first wife Elizabeth, his brother Earl Dallas Carlton and his sister Frances (Carlton Eley) Reed. A graveside service followed by internment will be held at 2 p.m. on Thursday, November 19, at Cothran Cemetery in Rover, TN. Chaplain Martin Nutter will officiate. The family strongly requests that masks be worn and social distancing be practiced during all commemoration events. Feldhaus Memorial Chapel is assisting the family with the arrangements.

John C. Carlton, Sr., 93, of Shelbyville, TN, passed away peacefully on November 16, 2020, at Alive Hospice in Murfreesboro, TN. He was born on March 15, 1927, in Rover, TN, to the late Maggie (Smotherman) and David Clayton Carlton. A proud... View Obituary & Service Information

The family of Mr. John Clayton Carlton Sr. created this Life Tributes page to make it easy to share your memories.

Send flowers to the Carlton family.