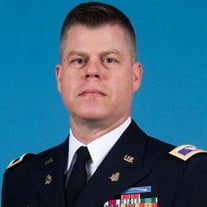 Jonathan (Jon) Jackson Vannatta was born December 17, 1971 in Shelbyville, TN. Jon was the son of Marvin Jackson “Jack” and Linda Marie Overcast Vannatta. Jon died December 31, 2019 in a plane crash in Kansas City. Jon held the rank of Colonel in the US Army Reserves. Prior to his promotion as a Colonel he was a US Army Battalion Commander in Tulsa, Oklahoma. He was recently promoted as the Commander of the 354th Civil Affairs Army Brigade headquartered in White Plains, Maryland. Colonel Vannatta earned a Master’s Degree in public administration from the University of Arkansas and a Master’s Degree in Strategic Solutions from the Army War College in Carlisle, PA. Colonel Vannatta was a 1994 graduate of the United States Military Academy at West Point, New York, where he excelled as a military scholar. Colonel Vannatta was a 4-year member of the West Point equestrian team where he served as captain of the team for 2 years. Upon graduation from West Point, Colonel Vannatta selected the infantry division of the US Army where he earned his Ranger tab. He subsequently earned his Parachutist badge, Air Assault badge, Expert Infantry badge and his Combat Action badge. Colonel Vannatta was a highly intelligent man and a true American patriot, willing and more than able to serve his country and his fellow man in any way possible. Colonel Vannatta served two separate tours of duty in Afghanistan; one tour in 2005 and again in 2012. Colonel Vannatta was awarded the Bronze Star Meritorious Service Medal for his military service and many other awards as well. Colonel Vannatta also spent 5 years stationed at Fort Hood, Texas. Prior to his acceptance to the United States Military Academy at West Point, Colonel Vannatta was a 1990 graduate of Goodpasture Christian School. While in high school, Jon excelled academically and he also served as president of the student body at Goodpasture. He was an all-state cross-country runner, setting the record for the mile run at Goodpasture. His 4 by 4 hundred meter relay team was ranked third in the state. As a young man, Jon was an award-winning member of the USAA swim team. As a swimmer, Jon was a member of the southeastern all-star team. Jon was a current resident of Maumelle, Arkansas. A paramedic and volunteer firefighter with the Maumelle Volunteer Fire Department Jon served in this capacity from 2006-2014. Jon was a nationally certified paramedic and he kept that certification current. Jon worked out of the Little Rock, Arkansas office of the Drug Enforcement Agency, (DEA) where he served as a federal DEA Special Agent. Jon joined the DEA after completing his initial DEA coursework training at Quantico. Jon served as a DEA agent for twenty years. His territory was the entire state of AR although he was called upon to assist in multiple other locations as well. An avid sportsman, Jon liked nothing better than quail hunting with his dad on the family farm. As a youngster Jon took great pleasure from riding his favorite horse JJ. He also enjoyed spending time with his cousin, Tommy Beernink. Jon was preceded in death by his maternal grandparents, Marie and Everette Overcast and paternal grandparents, Marvin “Pete” and Elizabeth “Knot” Vannatta, and two uncles, Bobby Vannatta and Ray Vannatta. In addition to his parents, he is survived by his uncle, Mike (Peggy) Overcast, his aunt, Elaine (Fred) Bonney, and his aunt Linda (Bobby) Vannatta. Colonel Jonathan Jackson Vannatta will be buried with full military honors at Willow Mount Cemetery in Shelbyville, TN, on Thursday, January 9, 2020. Visitation with the family will be held 11:00 A.M. -3:00 P.M. at Fairlane Church of Christ 101 Dow Drive Shelbyville, Tennessee 37160, with the funeral to follow at 3:00 P.M. at the church. A memorial service is scheduled in Little Rock, AR at a later date. Brother Mark Pierce, pastor at Horse Mountain Church of Christ, will officiate at the service. Honorary officiant for the service is Mr. Harry Middleton, associate pastor at Lebanon Road Church of Christ. Lebanon Road church was Jon’s home congregation and he was baptized there at the age of 12. In lieu of flowers, memorials may be made to Horse Mountain Church, 1320 Horse Mt. Road, Shelbyville, TN 37160. Feldhaus Memorial Chapel is assisting the family with arrangements.

The family of Col. Jonathan Jackson Vannatta created this Life Tributes page to make it easy to share your memories.

Send flowers to the Vannatta family.