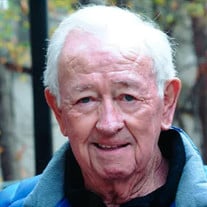 Joseph Martin Finch of Shelbyville, Tennessee passed away Tuesday April 3, 2018, surrounded by his family. Joe is survived by his wife Gail, his three daughters, Kim Withrow, Suzie Finch and Lisa McMahan, his three grandchildren, Joseph, Brooks and Max Withrow and his brother Bill Finch. In lieu of a funeral service, a Celebration of Life will be held for family and friends at the Blue-Ribbon Circle Club on the Celebration Show Grounds April 22nd from 1-4pm. All friends and family are invited. Joe lived a full life. He was born in Frederickstown, Ohio during the depression and become a brick mason working with his father as a young adult. In June 1945 he enlisted in the Navy at 17 years of age and served on a munitions ship in the South Pacific. After his military service, he graduated from Ohio State University with a degree in Business Administration. While at Ohio State, he served as president of his fraternity Sigma Pi. He remained a lifelong Buckeye fan. Upon graduation from college, he went to work for Alcoa in Garwood, New Jersey. On a blind date, he met the love of his life, Gail Kimble Carson, and they married in May 1955. He worked for Alcoa for 37 years, starting in the Purchasing Group and moving into Real Estate Development. Joe was President of Alcoa Properties when he retired. During his years with Alcoa, Joe and Gail moved over 20 times, including stops in Suriname South America, Pittsburgh Pennsylvania, Hollywood Florida, San Francisco, California, finally retiring in Mobile, Alabama. Joe and Gail met many wonderful friends in all the places they lived and continued those friendships throughout their lives. Joe’s hobbies were playing golf and Standardbred race horses. Joe was a member of the Mobile Country Club for 30 years and played several days a week until age 85. He also owned and raced Standardbred horses in his younger days on the Ohio and Pennsylvania Fair Circuit. In recent years, Joe enjoyed watching the Tennessee Walking horse shows in the area. One of the greatest joys of his life was being Pop Pop to his 3 grandchildren. He loved watching them play sports and was always at their games to cheer them on. Joe’s relaxed demeanor and keen sense of humor will be missed by all who knew him. Feldhaus Memorial Chapel is assisting the family with the arrangements.

The family of Mr. Joseph Martin Finch created this Life Tributes page to make it easy to share your memories.

Send flowers to the Finch family.