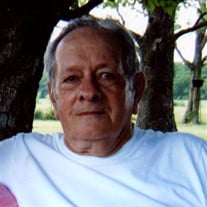 Kenneth Wiser, 86, of Fosterville, Tennessee, passed away peacefully on January 7, 2018. He was born in Fairfield, Tennessee on March 9, 1931, to Newman and Pearl Wiser. He grew up in the Wartrace community and played basketball and football in school. He graduated from Wartrace High School in 1949. He married Edwina Cates in 1953 and they enjoyed 60+ years together until her passing in 2014. In 1953, Kenneth was drafted into the army where he served two years which included time stationed in Germany. After his discharge, he returned home and soon began a career with State Farm Insurance. He retired as a Manager with State Farm Insurance after 35 years of service. Kenneth loved his family and friends. His favorite things included taking his family to the lake to crappie fish, dove hunting and rabbit hunting with his pack of beagle hounds. He also loved to play Rook, Hearts, or Spades with his family and friends. Kenneth was an involved father and loved attending his sons’ sporting events. Kenneth enjoyed farming as a hobby and raised cattle, hay, and a family garden. He enjoyed country and blue grass music and often sang to his sons and grandchildren. Kenneth was preceded in death by his wife, Edwina Cates Wiser, his son, David Kenneth Wiser, his grandson, Nick Wiser, and his parents, Newman and Pearl Wiser, and four siblings. He was loved and will be missed by his sons, Dan Wiser, Shelbyville TN, Mark Wiser (Gina), Chapel Hill TN, and Ted Wiser (Lynn), Nashville TN, as well as his grandchildren, Caroline Wiser, Matthew Wiser, Anna Wiser, and Andrew Wiser. Funeral services will be 2:00 PM, Thursday, January 11, 2017, at Feldhaus Memorial Chapel. Carter Woodruff will officiate with burial to follow at Woodfin Cemetery in Fosterville. The family will receive visitors from 3:00 – 7:00 PM on Wednesday, January 10, 2017. Feldhaus Memorial Chapel is assisting the family with the arrangements.

Kenneth Wiser, 86, of Fosterville, Tennessee, passed away peacefully on January 7, 2018. He was born in Fairfield, Tennessee on March 9, 1931, to Newman and Pearl Wiser. He grew up in the Wartrace community and played basketball and football... View Obituary & Service Information

The family of Mr. Kenneth Wayne Wiser created this Life Tributes page to make it easy to share your memories.

Send flowers to the Wiser family.