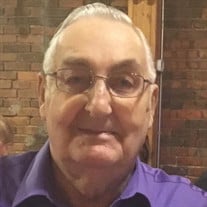 Kenneth Roy Wood “Woody”, age 87, passed away on Monday, March 21st, 2022. He was born March 3rd, 1935, to Roy and Gladys Wood of Florida, New York. He is survived by his loving wife Virginia “Jenny” Wood of 64 years; son Daniel (Dana) Wood of Moss Bluff, Louisiana; daughter Janet (Harold) Williams of Athens, Alabama; sisters Joan Krajewski of Montgomery, New York, Corinne Weeden of Florida, New York; brother Thomas (Joann) Wood of Mineville, New York; sisters in law Doris Smith, Loretta Trust, and Laverna Davis; grandchildren Candice (Jacob) Brown, Shelby Wood, and Colton Wood and several nieces and nephews. He was preceded in death by his parents; sister, Grace Petrillo; In-laws Fred and Dottie Smith; Norman and Eva Jean Smith, Ken Smith, Larry Trust, Auston Davis, Charles Buchalski, Frank Weeden, and Joe Kowalczyk. Most knew Kenneth by the nickname “Woody”, but those who loved him also knew him as “Papa” and “Bud.” He graduated from Seward High School, of Florida, New York, in 1953. After graduation, he entered into the Air Force and served until 1957 as an S/Sgt. He later worked as a superintendent for Melson Contractors and Parsley Brothers of Murfreesboro, overseeing many projects in the Middle Tennessee area. He was a coach and president of the little league in Shelbyville, TN, coached junior-pro basketball, and was a passionate Atlanta Braves fan. He enjoyed bowling and once bowled a 730 in a three-game series tournament, an accomplishment he was very proud of. The scoresheet is still in his wallet. After he retired, at the age of 80 years old, he started painting art and in 2020 had painted over 400 paintings, which are now scattered over the US in the home of family and friends. Kenneth was a devoted member of Horse Mountain Church of Christ. Kenneth lived a very accomplished and fulfilling life, full of true descriptive tales that made him a favorite story teller by all who knew him. His kindness and heroic nature will be dearly missed. Family, friends, and others whose lives Woody touched are invited to the Feldhaus Funeral Home, 2022 N Main Street, Shelbyville, TN 37160 on Friday, March 25th, 2022 at 3:00 PM. A visitation will be held prior to the funeral from 1:00-3:00 PM. A burial service will be immediately following the funeral at Hillcrest Memorial Gardens, 1802 Madison Street, Shelbyville, Tennessee 37160. Memorials and donations can be made to The American Heart Association 931-638-4173 Feldhaus Memorial Chapel is assisting the family with the arrangements.

The family of Mr. Kenneth Roy Wood created this Life Tributes page to make it easy to share your memories.

Send flowers to the Wood family.