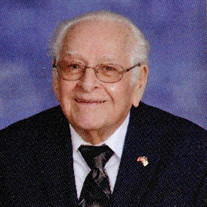 Mr. Kenneth L. Woods, Sr., age 85, of Shelbyville, passed away Wednesday, October 28, 2015. Funeral services will be 10 AM Saturday, October 31, 2015, at Edgemont Baptist Church. Brother Rob McKamey will officiate. Burial, with full military honors will follow in Willow Mount Cemetery. The family will receive visitors 4-8 PM Friday at the church. He was born June 10, 1930, in Forrest City, North Carolina, to the late William Harrison Woods and Joe Lennis Crawford Woods. He was a veteran of the United States army and served in the Korean War. Mr. Woods was a retired die cast operator from Ford Motor Company and was often referred to as a “workaholic”. He was a faithful member of Edgemont Baptist Church where he served as a Deacon. Preceding him in death were eleven brothers and four sisters. Survivors include his wife, Ethel Jane Thompson Woods, of Shelbyville. He passed away one day before they would have celebrated their 67th anniversary. Also surviving him are two daughters, Cathy (Ed) Kacarka, of Shelbyville, and Pamela Yake, of Taylor, Michigan; a son, Kenneth (Debra) Woods, Jr., of Shelbyville; six grandchildren, Sean, Stephanie, Jason, Benjamin, Brad, and Haley; two great grandsons; numerous nieces and nephews. Memorials may be made to the Choir Fund at Edgemont Baptist Church. Feldhaus Memorial Chapel is assisting the family with the arrangements.

The family of Mr. Kenneth Leon Woods Sr. created this Life Tributes page to make it easy to share your memories.

Send flowers to the Woods family.