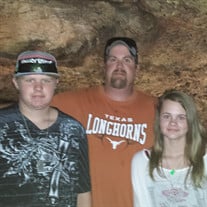 Mr. Larry Jesse Johnson, age 33, of Shelbyville, passed away Thursday, February 5, 2015. Funeral services will be 12 noon Tuesday, February 10, 2015, at Feldhaus Memorial Chapel. Burial will follow in Willow Mount Cemetery. The family will receive visitors 10 AM until service time Tuesday at the funeral home. He was born March 6, 1981, in Bossier City, Louisiana, to Neta Caldwell Huggins, of Shelbyville, and the late Larry Wayne Johnson. He was an oil field consultant for Weatherford Oil Company, and loved hunting and fishing. His children were his life. In addition to his mother, he is survived by a son, Larry Johnson, Jr. and a daughter, Amy Lee Johnson, both of Shelbyville; three sisters, Melisa Ballard and Stephanie (Michael) Gill, both of Shelbyville, and Denita Rose Johnson, of Bakersfield, California; step sisters, Leanne and Sissy; step mother, Cathy Johnson, and numerous nieces and nephews. Feldhaus Memorial Chapel is assisting the family with the arrangements.

The family of Mr. Larry Jesse Johnson created this Life Tributes page to make it easy to share your memories.

Send flowers to the Johnson family.