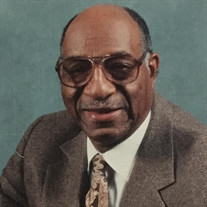 Coach Lendell Massengale, age 84, of Shelbyville, passed away Wednesday, January 18, 2017. Funeral services will be 1 PM Monday, January 23, 2017, at Scott United Methodist Church. Dr. Robin Kimbrough will be eulogist. Burial will follow in Mt. Ararat Cemetery. The family will receive visitors Sunday from 5-7 at the funeral home, and again Monday 11 AM until time of service at the church. “Coach” Lendell Massengale, Sr. was born in Marshall, Texas, in Panola County, on September 10, 1932. He was one of 13 children, including a twin sister, Idell, born to Hugh T. and Susie V. Massengale. He graduated from Pemberton High School in Marshall Texas in 1952, and went on to attend Tennessee State University (TSU) where he lettered in football for four years, playing the position of center. He also met and married his beloved wife, Marilyn Gipson Massengale, while at TSU. On Monday, January 15, 2017 they celebrated 62 years of marriage. To this union was born four amazing children – Lendell, Jr., Avery Carvel, Marilyn Louisa and Susan Ilene. Coach, as he was affectionately known by most, received both his Bachelors and Masters degree from TSU in Physical Education and certification in counseling from MTSU. He began his career as an educator in Shelbyville, Tennessee, Marilyn’s hometown, in 1956. At Bedford County Training School, later known as Harris High School. He was a classroom teacher and coached football, basketball and track. Later, after integration, he went to Central High School where he taught and coached track and freshman football. After his third season as Head Freshman Coach, his team was undefeated, of which Lendell Jr. was on the team. In his forth season, the team was not only undefeated but unscored on with the opposing team never crossing the 50 yard line. He would conclude his career at Central High as a Guidance Counselor for 20 years, where he advised, encouraged and even insisted that his students attend college and/or attained gainful employment. In many instances, he would take students to colleges, from Shelbyville to Nashville and beyond to get them enrolled in addition to securing scholarships on their behalf. In the role as community activist and servant, Coach served as a Shelbyville City Councilman for twenty years. He was the first African American to to hold this position. He was threatened by the Klu Klux Klan when he led a movement to discontinue the collection of money at an intersection in downtown Shelbyville. The KKK once told him to step down as City Councilman or he would be killed. His response was”The coward who wrote that letter can come forward, we can discuss it like men.” He was later appointed Vice Mayor of the city. He was the first African American to run for Mayor of the city of Shelbyville. His bid was unsuccessful, but it paved the way for many more who hold elected positions in the city and county today. He played a pivotal role in the creation and current day reality of the H.V. Griffith Park and Recreation Facility where his name is etched on the cornerstone of the facility. Coach taught many of the youth in Shelbyville to drive while serving as a Driver’s Education Instructor. From 1972 – 1976, he could be heard on the Shelbyville radio station, spinning rhythm and blues records from 10 p.m. to midnight as the radio disc jockey known as the“Soul King.” Coach was also an entrepreneur who sold cars and fine clothing accessories, in line with his own reputation for being well-dressed. A member of Scotts Chapel United Methodist Church, Coach was a church trustee, among other roles. He enjoyed spending time with family and friends, and continued to return to Marshall, Texas for his high school reunions, never missing one until his health began to decline. Left to continue his legacy of achievement and service are his wife of 62 years, Marilyn Gipson Massengale, his children, Lendell, Jr. (Kelsey), Carvel (Anita), Marilyn Louisa Harris (Terone, Jr.) and Susan McClain; Sister, Ollie Massengale Braxton Greenhouse; grandchildren, Gabriel, Christi(Seth), Lenzie, Lexie, Dakota, Dalton, Avery, Ariel, Terone III, Terilyn, Bryson, Malia and Olivia; great-grandchildren, Myell, Amiyah and Halcyon; Brother-in-law, Samuel J.V. Abernathy, and a host of nephews, nieces, other relatives and family friends. Feldhaus Memorial Chapel is assisting the family with the arrangements.

The family of Coach Lendell Massengale created this Life Tributes page to make it easy to share your memories.

Send flowers to the Massengale family.