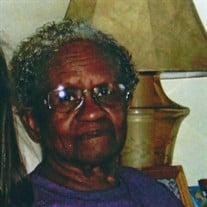 Mrs. Lettie Ruth Phillips, age 88, of Wartrace, passed away August 26, 2018. Funeral services will be 2:00 P.M. Wednesday, August 29, 2018, at Bright Temple Church of God in Christ. Reverend Dr. Sandra K. Avent will officiate with burial to follow at Mt. Ararat Cemetery. The family will receive visitors from 1:00 P.M. until the time of service. She was born September 12, 1929, in Raus, TN, to the late James Herbert and Sam Ora Nelson. She departed this earthly life on August 26, 2018, at the age of 88, at The Waters Nursing home in Shelbyville where she had lived for 7 plus years, surrounded by her children, grandchildren, siblings, and other relatives. She was the second oldest of 15 children and was preceded in death by 9 of her siblings. She attended school at Shipman Creek and later married Walter lee Phillips on December 29,1959, in Vaiden, MS, where they made their home for 24 years. Four children were born of this marriage; Walter Lee, Jr., Cynthia Ann, Danny Ray (Jodi), and Willie James who survive her. Mr. and Mrs. Phillips moved to Tennessee in September 1974, where they remained until their respective death on November 2, 1987, and August 26, 2018. She was raised in the church and last joined Mt. Zion Haley Baptist Church were she attended regularly until failing health. She served on the Mother's Board, was a choir member, soloist, Assistant Sunday school teacher, and Head of Hospitality. She was an excellent cook and known for her culinary skills in planning and preparing food for the church on special occasions. She was also a member of Rebecca Chapter OES #34 in Shelbyville, TN. Lettie was very humorous and everyone that knew her enjoyed many of the stories and tall tales she would relate. She enjoyed watching her "stories" (ie. soap operas) and could tell you what was going to happen next or should happen on various stories. She was truly a joy to all who knew her, her children, grandchildren, and great-grandchildren adored her including siblings, nieces, nephews, in-laws, cousins, and other relatives. She was preceded in death by her oldest son, Jimmy Lewis Rippy; step daughter, Ruthie Thomas; four sisters, Bessie Phillips, Alberta Cooper, Joella Jones, and Lovie Odell Rippy; five brothers, James Herbert Rippy, Jr., Coley Rippy, Kenneth Eugene Rippy, Sr., Roy Rippy, and Aurther L. Rippy. She leaves to cherish her memory her four children: Walter Lee Phillps, Jr., of Wartrace; Danny Ray (Jodi) Phillips, of Shelbyville; Cynthia Ann Greer, of Wartrace, and Willie James Phillps, of Shelbyville. Other survivors include her five siblings: Lucy Mai Edwards, of Vaiden, MS; Willie Lee (Ella Mai) Rippy, of Shelbyvulle; Janie Rippy and Mack M. Rippy, of Shelbyville, and Jessie P. (Ricki) Rippy, of Wartrace; eight grandchildren (a grandson, Cory Phillips preceded her in death), ten great-grandchildren, numerous nieces, nephews, cousins, and other relatives, and friends. Feldhaus Memorial Chapel is assisting the family with the arrangements.

The family of Mrs. Lettie Ruth Phillips created this Life Tributes page to make it easy to share your memories.

Send flowers to the Phillips family.