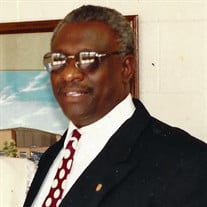 Mr. Lonnie Daniel Reynolds, age 74, of Detroit, Michigan, a native of Shelbyville, passed away November, 2019, in Detroit. Funeral services will be 2 PM Sunday, November 17, 2019, at Feldhaus Memorial Chapel. Brother Anthony Booker will be eulogist, with burial to follow in Willow Mount Cemetery. The family will receive visitors one hour prior to service Sunday at the funeral home. Lonnie was born December 22, 1944, in Shelbyville, TN. He was the son of the late Donna Ruth Gill Reynolds and the late Adams D (Bessie) Reynolds. Lonnie departed this life Wednesday, November 6, 2019 in Westland, MI, where he resided for many years. Lonnie professed his faith in Christ at an early age. He was a devoted and faithful member of Ypsilanti Church of Christ, Ypsilanti, MI until his demise. He was a 1962 graduate of Bedford County Training School, in Shelbyville, TN. He was a graduate of Tennessee State University where he earned his Bachelor’s Degree. He later returned to college and earned his Master’s Degree. Lonnie was an outstanding football player at both BCTS and TSU. He served in the United States Army. He played in the hit movie “The Green Berets” which premiered July, 4, 1968. Lonnie retired from Ford Motor Company as a Human Resource Manager. He also worked at Rouge Steel Company/Severstall. He was a member of the Kappa Alpha Psi Fraternity and the Shriners. Lonnie was preceded in death by two brothers, Timmy Reynolds and Perry Reese. He leaves to cherish his memory, two sisters, Linda Harvey, Riverside, CA and Patricia Reynolds, Shelbyville, TN ; two brothers, Jimmy Reynolds and Larry Reynolds, both of Shelbyville, TN; one aunt, Lizzie Reynolds, Shelbyville, TN; one uncle Elder Ray (Vanita) Reynolds, Los Angeles, CA; three devoted cousins, Laura Mai Gill and Ann Buchanan both of Chicago, IL and Thomas (Barbra) Gill, Sr., Madison, TN; four nephews and a host of relatives and friends. Feldhaus Memorial Chapel is assisting the family.

The family of Mr. Lonnie Daniel Reynolds created this Life Tributes page to make it easy to share your memories.

Send flowers to the Reynolds family.