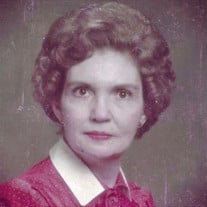 Mrs. Marilyn E. Nelms, age 85, of Tullahoma, passed away Sunday, February 17, 2019. Funeral services will be 2 PM Thursday, February 21, 2019, at Feldhaus Memorial Chapel. Burial will follow in Willow Mount Cemetery. The family will receive visitors 12 noon until service time Thursday at the funeral home. She was born August 21, 1933, in Elkhart, Indiana, to the late Harley and Treva Long. She was employed with Carrier Corporation for many years, and then worked with and retired from Eaton Corporation. She was a homemaker and member of the Church of Christ. Preceding her in death were two brothers, William “Sonny” Long and Frederick Long; two sisters, Barbara Pauley and Judy Houston; a step grandchild, Chris Duke. Survivors include her husband, Lewis Nelms, Sr., of Tullahoma; step sons, Randy Nelms, and his wife Leigh Anne, of Franklin, and Richard Duke, and his wife Wendy, of Manchester; a step daughter, Janice Michel, and her husband Jarrett, of Ft. Worth, Texas; step grandchildren, Mitchell Lewis Nelms, Jordan Lee Nelms, Christian Michel, Jabron Michel, and Lynn Duke; two step great grandchildren, and a host of nieces and nephews. Memorials may be made to the charity of your choice. Feldhaus Memorial Chapel is assisting the family with the arrangements.

The family of Mrs. Marilyn E. Nelms created this Life Tributes page to make it easy to share your memories.

Send flowers to the Nelms family.