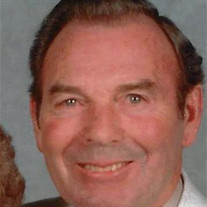 Mr. Marvin A. “Smiley” Brown, age 81, of Shelbyville, passed away Friday, March 31, 2017, at The Waters of Shelbyville. Funeral services will be 11 AM Tuesday, April 4, 2017, at Feldhaus Memorial Chapel. Reverend Ron Dewitt and Phil Baker will officiate, with burial to follow in Simpson Cemetery in the Rover Community. The family will receive visitors Monday 4-7 PM at the funeral home. He was born October 22, 1935, in Limestone, Alabama, to the late Lawrence and Katherine Hargrove Brown. Mr. Brown retired from Aramark in 1997, after 32 years of service, and then worked many years at Sullivan’s Detail Shop. He was a faithful member of the First Church of The Nazarene. Preceding him in death was a brother, Bill Brown. Survivors include his wife of 61 years, Betty Brown, a daughter, Teresa (Larry) Curry, and a son, Jeff Brown, all of Shelbyville; two granddaughters, Brandi (Daniel) Dye, of Shelbyville, and Monica (Jason) Stamer, of Texas; three great grandsons, Jansen Ward and Dayton Dye, both of Shelbyville, and Brandon Cook, of Texas; a great granddaughter, Kaylee Cook, of Texas; a sister, Fay (Joe) Coble, of Chapel Hill. Memorials may be made to the Alzheimer’s Association, 201 West Lincoln St., Tullahoma, TN 37388. Feldhaus Memorial Chapel is assisting the family with the arrangements.

The family of Mr. Marvin "Smiley" Brown created this Life Tributes page to make it easy to share your memories.