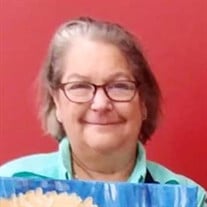 Mary Jo Pitts March 11, 1952 - December 26, 2021 Mary Jo passed away peacefully at home on December 26th, 2021 after a valiant battle with a number of significant health challenges. She was 69 years old. Mary Jo’s husband of 33 years, Terry (TP), was at her bedside, as was her only daughter, Delia Knuteson, and her husband Bill. Mary Jo was born in Pittsburgh of Italian immigrant parents; she later enjoyed her teenage years in Hawaii, graduating from Kailua high school. As a young adult, she found her way to Arkansas where she met her husband, Terry. Always a gentle spirit and a lover of animals, it was discovered that she was able to form truly unique bonds of understanding and trust with animals that went well beyond the explainable. These special gifts immersed her and her family into a life, that in one way or another, would always include furry friends. Saving an orphaned, disadvantaged, or abandoned animal was every bit as important to her as winning a first place agility ribbon, or earning a “Q “. Mary Jo and Terry moved to Shelbyville, TN in the early 90s where she continued participating in the things she loved, while cultivating a long list of priceless friendships. Those friendships will continue into eternity. Mary Jo was a vivacious soul with an uncanny zest for life. She was passionate, compassionate, and unmatched in her selfless generosity. She lived her life by her favorite Ralph Waldo Emerson quote, “The greatest gift is a portion of thyself.” She had a servant’s heart, and nothing made her happier than to do something kind for another person. Her kind heart, and that old-school Italian wisdom, rarely failed to solve someone’s problem, answer their question, or at least offer some sage advice that was always grounded in truth, love, and compassion. Mary Jo is survived by her husband Terry. Also, ex-husband Ken Willes of Little Rock, AR. and their daughter, Delia Marie Knuteson of Houston, TX., Sister, Flora Collette of N. Little Rock, AR., Aunt Joyce, Lorraine, and numerous other cousins in Pittsburg, and other areas, many nieces and nephews: Krista, Jon, Paul, Courtney, Ashley, Amy, Heather, Hollie, and a host of step grandchildren and step great-grandchildren. She was preceded in death by her father, Delio Colonna, her mother, Flora B Colonna, and her brother, Delio “Jerry” Colonna Jr. Friends may come by the funeral home 12-5 PM Wednesday, December 29, 2021, to view the slide show, and obtain a memorial record. The family will not be present. There will be a family and friend’s memorial service at 5 PM Wednesday, December 29, 2021, at Feldhaus Memorial Chapel. Reverend Mark Ashley will officiate. Memorials may be made to the charity of your choice or any local animal shelter. Feldhaus Memorial Chapel is assisting the family with the arrangements.

The family of Mrs. Mary Jo Pitts created this Life Tributes page to make it easy to share your memories.

Send flowers to the Pitts family.