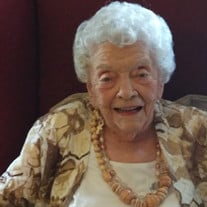 Mrs. Mary Lynn Prince, of Shelbyville, passed away Friday, March 15, 2019, twenty-seven days before of her 103rd birthday. Mrs. Prince, affectionately known as “Bubber”, was born April 11, 1916, in Bedford County, to the late Samuel Porter and Mary Ann Wallis Hastings. Funeral service will be 2 PM, March 18, 2019, at the First Christian Church. Rev. Kyle Harris will officiate, with burial to follow in Willow Mount Cemetery. The family will receive visitors 11AM- 2 PM Monday at the church. She was a graduate of Central High School and Draughn’s Business College, Nashville. One of her first positions was with Duck Electric. She was the second person hired in 1936, working there until her husband returned from World War II. She was married March 5, 1938, to the late Robert “Bob” Prince who died June 3, 1963. Following his death, she worked at the Veterans Administration, Murfreesboro, for 15 years. seven years. She held membership in Potpourri Extension Club and Bedford County Historical Society. She maintained membership in The Daughters of the American Revolution, (DAR) where she served a secretary, and the Circle at First Christian Church, where she was a lifetime member, being enrolled in the Cradle Roll since 1916. She was a member of FCE Club, Woman Breakfast Club (The GRITS); and volunteered for The Senior Citizens, delivering meals to “shut-ins” since 1983. Mrs. Prince was also the Founder of the Christian Singles. She was a beloved Wife, Mother, Sister who enjoyed gardening her flowers and loved traveling- having been to Fifty- Seven countries- frequently flying to Europe and Thailand. Mrs. Prince’s family roots run deep in Bedford County, beginning with Pleasant Arnold, Great Grandfather- who was killed in the Confederate War, and on the Wallis side land was donated for the Himesville School. On the Hastings side, Joseph Hastings, a Patriot in the Revolutionary War, gave land for the Hastings Campground- later known as New Hope Church. In addition to her husband, she was preceded in death by a great granddaughter, Amelia Grace Henegar, sister and brother in law, Nancy and Chuck Stowers, a brother, Paul (Mary) Hastings, and her son in law and best friend, Dan Lewis. She is survived by two children, Marilyn Lewis, Shelbyville and Bobby (Welmoet) Prince of Hilversum, The Netherlands; one niece- Joan Stowers, Shelbyville, and one nephew- Sam (Judy) Hastings, Ft. Myers, FL. Six grandchildren- Brian (Tabitha) Lewis, Shelbyville; Lynette (Thienchai) Shelbyville, Trisha (Rick) Henegar, Murfreesboro; Robert M. Prince III, Caroline Prince, Emilie Prince all in The Netherlands. Six Great- Grandchildren: Tyler Lewis, Alexander (Beth) Pinvises, Andrew (Sarah), Ariel (Stephen) Shirley, Adele (Jeff) Bromley, and Alaina; five Great-Great Grandchildren. Memorials may be made to New Hope Cemetery, C/O Larry Hastings, 931 Old Virginia Road, Shelbyville, TN 37160, or to First Christian Church. Feldhaus Memorial Chapel is assisting the family with the arrangements.

The family of Mrs. Mary Lynn Prince created this Life Tributes page to make it easy to share your memories.

Send flowers to the Prince family.