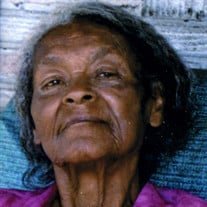 Mrs. Mattie J. Ray Anderson, age 96, of Shelbyville, passed away Saturday, August 5, 2017. Funeral services will be 12 noon Wednesday, August 9, 2017, at Galilee Primitive Baptist Church. Reverend Herbert Lee Stewart will be eulogist, with burial to follow in Holden Cemetery. The family will receive visitors Wednesday on hour prior to service at the church. She was born November 19, 1920, in Unionville, to the late William and Lela Johnson Ray. She was one of six children, and was a domestic housekeeper for many years. She was a faithful member, and served on the Usher Board at Galilee Primitive Baptist Church, before failing health forced her to discontinue. Preceding her in death was her husband, Clark “Dusty” Anderson, a son, Donnie C. Anderson, and five brothers, William “Peter Rabbit” Mayes, Lawrence Ray, Lonis Ray, M.B. “Beadie” Ray, and W.N. Ray. Survivors include a sister, Emma Lou Hughes, of Louisville, Kentucky; three grandsons, Jeffrey, Doran, and Cedric Anderson; six great grandchildren, daughter in law and special caregiver, Dora Tillman, and devoted niece, Vicky Waggoner Davidson; a host on nieces, nephews, relatives and friends. Feldhaus Memorial Chapel is assisting the family with the arrangements.

The family of Mrs. Mattie Anderson created this Life Tributes page to make it easy to share your memories.

Send flowers to the Anderson family.