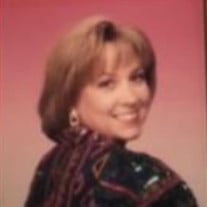 Mrs. Melissa Long Sanders, age 59, of Shelbyville, passed away Saturday, March 20, 2021, at her home, under the loving care and comfort of her family and Alive Hospice. A Celebration of Life may be held at a later date. Melissa Long Sanders was born on November 10th, 1961 in Oklahoma City, OK. She was preceded in death by her Daddy Jim Edward Long. She is survived by her husband Jeff Sanders, three children, step son Jeffrey (Cassie), Shelby, Austin, her mother Mary Ellen Long (Clarke), a sister Jennifer Long, and a brother Scott Long (Trish) and many more relatives and friends. She was a graduate of Bethel High School in 1980 and began her career right away as a civil servant at Tinker Air Force Base in Midwest City, OK. Missy married Jeffrey Lee Sanders in 1985, and they spent their first 8 years of marriage enjoying life together (including many weekends on the lake) before deciding to have a daughter, Shelby Lyn in 1993, and a son, Austin Cooper, in 1996. Missy was able to take a deferred retirement in 2001 which allowed her to spend more time with her children as they grew up, and she was truly an exemplary mother not only to her own children, but to many of their classmates as she volunteered her time at the school. Missy also enjoyed spending weekends watching NASCAR races with her family, and it is worth noting that there could not have ever been a bigger Dale Earnhardt fan than her. After a short time living in Florida in 2008, the family moved to Tennessee in 2009, where Missy began to cultivate her love of decorating, fixing up old furniture, and attending various art classes to sharpen her skills. Many of Missy’s creations adorn her home and the homes of her family and friends. Her frequent use of bright colors symbolize the light that her unfailing kindness brought to everyone she knew. Missy LOVED traveling, especially to the beach, and recently returned to her family’s roots on a trip to Sweetwater Station to visit Uncle Phil and Aunt Amy Clarke. Missy was always thinking of others. She was a volunteer at the hospital where she made friends with many people and helped them during their loved ones sicknesses and loss. She also had a Color Street Nails business. She didn’t do the nails to make money. The majority of them were bundled up and sent to The Blessing Box project that assists women recovering from breast cancer. Missy said it was important for women to feel pretty during recovery and pretty fingernails helped. She radiated positivity and encouraged everyone she knew and loved to be their very best and she made the world a better place just by being in it. It goes without saying our whole family will miss her guidance and love. Her final lap around the race track is only eased by knowing her Daddy was waiting on her at the finish line. Feldhaus Memorial Chapel is assisting the family with the arrangements.

Mrs. Melissa Long Sanders, age 59, of Shelbyville, passed away Saturday, March 20, 2021, at her home, under the loving care and comfort of her family and Alive Hospice. A Celebration of Life may be held at a later date. Melissa Long Sanders... View Obituary & Service Information

The family of Mrs. Melissa Long Sanders created this Life Tributes page to make it easy to share your memories.

Send flowers to the Sanders family.