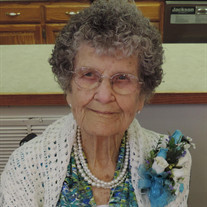 Mrs. Ola Earline Crosslin McCormick was born in Bedford County, May 4, 1918, to the late Leslie and Zannie Driver Crosslin. She entered into her HEAVENLY Home, June 20, 2016, peacefully at her home surrounded by her family. She was preceded in death by her husband Charles Bob “CB” McCormick, sister Mamie Crosslin Carter, infant son Thurman Freeman Barlow, daughter Nettie Mae Barlow Adcock, and daughter-in-law Judith Ann Kraus McCormick. She belonged to Edgemont Baptist Church where she attended regularly and loved to sing Amazing Grace. In 2006 she was voted as Mother of the Year. She retired from Empire Pencil Company in Shelbvyille and at the time of their 100th Anniversary June 2016 she was the oldest living employee. Upon her retirement from Empire she helped her daughter at Miss Judie’s Daycare for 30 years. Here she helped raise and influence many children in our community, including her first great grandson, Andrew, who is now serving in the U.S. Navy in Japan. In her spare time you could find her enjoying her beautiful flowers, getting ready to go fishing or relaxing by cross stitching or coloring. The last weekend in August you could ALWAYS find her in box K-47 at the Walking Horse National Celebration. What pride she felt as she watched her baby riding those Tennessee Walking Horses. Left to carry on her wishes of family gatherings and good times are her children: daughter Judie Mae McCormick Pope (Alton),sons Charles Edward “Mac” McCormick , Leslie Mitchell McCormick (Becky), Thomas Melvin McCormick (Gale), Mickey Joe McCormick (Dru). Her sister Adel Crosslin Love and many grandchildren, and great grandchildren that GOD so blessed her with. She was a caring mother, granny and friend to all that were privileged to have met her. The family will receive visitors 4:00 - 8:00 P.M. Monday, June 27, 2016,at Feldhaus Memorial Chapel. Funeral services will be 11:00 A.M. Tuesday, June 28,2016, at the funeral home with burial to follow at Cothran Cemetery in Rover, Tennessee. Brother Steve Atwood and Brother Jeffery Hester will officiate. Feldhaus Memorial Chapel is assisting the family with arrangements.

Mrs. Ola Earline Crosslin McCormick was born in Bedford County, May 4, 1918, to the late Leslie and Zannie Driver Crosslin. She entered into her HEAVENLY Home, June 20, 2016, peacefully at her home surrounded by her family. She was preceded... View Obituary & Service Information

The family of Mrs. Ola Earline Crosslin McCormick created this Life Tributes page to make it easy to share your memories.

Send flowers to the McCormick family.