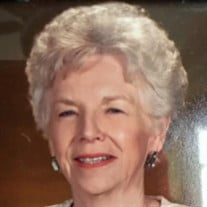 Mrs. Patsy W. Crosslin Holmes, age 83, of Shelbyville, passed away August 24, 2020. Graveside services will be Saturday, August 29, 2020, at Hillcrest Memorial Gardens. Brother Ron DeWitt will officiate. There will be no public visitation. She was born July 26, 1937, in Shelbyville, to the late James Douglas Wortham and Zelma Ruth Asherbranner Wortham. She worked at the local Caster’s Knott Store and later at Peoples Bank. She held membership in the First Church of The Nazerene. In addition to her parents, she was preceded in death by her first husband, Avery (Buster) Crosslin, the devoted father of their children, in 1994, and a brother, Jerry Wayne Wortham. Survivors include sons, Bryan Crosslin, and his wife Teresa, and Brent Crosslin, both of Shelbyville; daughter, Carole Dunnam, and her husband Charles, of Mobile, Alabama; brother, James Wortham, Jr. and sister, Rose Marie Juenke; grandchildren, Jeremy Crosslin, and his wife Kasey and Derek Jones, and his wife Malisa; great grandchildren, Emily Crosslin, Gunner Crosslin, Avery Anne Jones, and Jaymason Bruss-Ramirez. In addition, Patsy was married to Donald Holmes, who preceded her in death. Donald is survived by a daughter, Stephanie Fulton, and her husband Kevin and two grandchildren, Thomas and Trenton Upchurch. Donald was preceded in death by two sons, Gary Holmes and Kevin Holmes. Feldhaus Memorial Chapel is assisting the family with the arrangements.

The family of Mrs. Patsy Crosslin Holmes created this Life Tributes page to make it easy to share your memories.

Send flowers to the Holmes family.