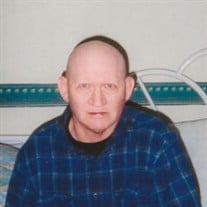 Paul L. McCrary Sr. age 75 of Shelbyville, Tennessee peacefully passed away on Friday, March 26, 2021 at his residence, surrounded by his loved ones. A memorial service will be held 3:00 P.M. Saturday, April 3, 2021, at Feldhaus Memorial Chapel. Visitation will be one hour prior to the service. Paul was born on February 24, 1946 in Rutherford County. He was a beloved husband of 54 years to his wife Margaret McCrary and a wonderful father and grandfather. He worked for many years as a dedicated dairy farmer. Paul enjoyed spending time with his family, going for car rides to sight see and watching his old Westerns on tv, especially Gunsmoke. He was a great storyteller with an unmatched sense of humor. He was a man of many talents. Whether it was singing songs, playing instruments or fixing just about anything, he could do it. He is preceded in death by parents, Ann Thompson McCrary and Bernice L. McCrary, sister; Penny, brothers; Steve and David. He is survived by his wife of 54 years, Margaret Ann McCrary, children; Paul L. McCrary Jr., Jarrod Heath (Tony) McCrary, Angela ( Mark) Lee, James McCrary, Amber Edwards and Autumn Edwards. brothers; Phillip McCrary, Tommy McCrary and sister; Peggy McCrary Price; brother in law, Herbert Sanders, and his wife Barbara; Grandchildren; Josie, Lance, Kaitlyn, Steven, Brody, Lane, Daniel, Aiden, Cullen and numerous nieces and nephews. Great Grandchildren; Aydan Cook, Chase Cook, Ansley Harper, Maverick and Diesel. Feldhaus Memorial Chapel is assisting the family with the arrangements.

Paul L. McCrary Sr. age 75 of Shelbyville, Tennessee peacefully passed away on Friday, March 26, 2021 at his residence, surrounded by his loved ones. A memorial service will be held 3:00 P.M. Saturday, April 3, 2021, at Feldhaus Memorial Chapel.... View Obituary & Service Information

The family of Mr. Paul Lofton McCrary created this Life Tributes page to make it easy to share your memories.

Send flowers to the McCrary family.