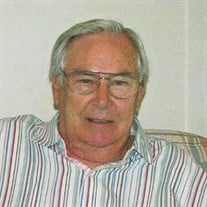 Paul Johnson Wagster, 88, resident of Columbia, Tennessee, passed from this earthly life on April 5, 2022. A graveside service will be conducted at 5:00pm on Monday, April 18, 2022, at Willow Mount Cemetery in Shelbyville. Born on March 6, 1934, he was the youngest child of the late Berry Johnson Wagster and Nora Newsom Wagster and grew up in Moore County in the Charity community. He graduated from Lynchburg High School in 1953. He was married to Frieda Ingle Wagster for 58 years until her passing in 2011. He has one child, Tricia (Buddy) Norman of Columbia. He is also survived by three grandchildren Juli (Vic) Beck of Columbia, Lt. Colonel John (Jaime) Norman of Oceanside, CA, and Jill (Billy) Fields of Columbia. He has nine great-grandchildren Lilli Beck, Charlie Beck, Jack Beck, Henry Beck, Johnny Norman, Scout Norman, Cora Norman, Ann Cortner Fields and William Fields. He was preceded in death by brother, Doyle Wagster and sisters, Obelene Groce and Virginia Groce. After high school, Mr. Wagster joined the United States Marine Corps, stationed at Camp LeJeune, North Carolina, and was honorably discharged in 1955. In 1958, he went to work in Shelbyville as a machinist with Empire Pencil Company. In 1978, he joined United Cities Gas as a sales representative and assistant manager in Shelbyville and town manager in Murfreesboro. He retired in 1997 and moved to Columbia to be near his family. He was a member of Highland Church of Christ. In lieu of flowers, memorials may be made to Miracle League of Columbia (columbiamiracleleague.com) or Maury United Ministries (mauryunited.org). Arrangements are being handled by Feldhaus Memorial Chapel.

Paul Johnson Wagster, 88, resident of Columbia, Tennessee, passed from this earthly life on April 5, 2022. A graveside service will be conducted at 5:00pm on Monday, April 18, 2022, at Willow Mount Cemetery in Shelbyville. Born on March... View Obituary & Service Information

The family of Paul Johnson Wagster created this Life Tributes page to make it easy to share your memories.

Send flowers to the Wagster family.