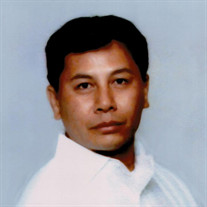 Mr. Poutha Peter Souphom, age 52, of Shelbyville, passed away October 10, 2021. Funeral Services will be 2 PM Saturday, October, 16, 2021, at Feldhaus Memorial Chapel. He was born April 10, 1969, in Laos, to Khamla Souphom, of Shelbyville, and the late Boun Souphom. He graduated top of his class at Alabama Christian Academy School, was a member of the National Honor Society, and captain of his high school football team. A hard-working man, he also loved to fish and was a good husband and father. He was a Christian man and held membership at Highland Church of Christ in Montgomery, Alabama. He was the former owner of the Golden Dragon restaurant in Columbus, Georgia, and Wetumpka, Georgia. In 1999, he moved to Tennessee and began his career as a farmer for Tyson Foods. In addition, he was a member of the Bedford County Fire Department. In addition to his mother, he is survived by his wife, Loth Siri Souphom; a son, Michael Souphom, and a daughter, Sabrina Souphom, all of Shelbyville; brothers, Sisay Souphom, and his wife Mary Allison Souphom, and Khanxay Souphom; sisters, Chanthala Candy Freeman, and her husband Jason L. Freeman; nieces and nephews, Siam Grey Souphom, Nina Freeman, and Kaleb Seth Humphries. Feldhaus Memorial Chapel is assisting the family with the arrangements.

The family of Mr. Poutha Peter Souphom created this Life Tributes page to make it easy to share your memories.

Send flowers to the Souphom family.